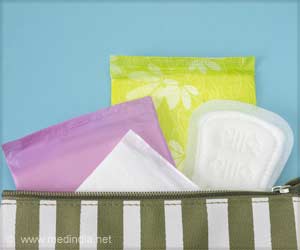 Biodegradable sanitary napkins and a 'beeswax cloth wrap' to replace silver foil came out as the winning novel innovations at the seven-day sustainable lifestyle challenge organised from January 17-23.

The challenge, organised by Embassy of Sweden in partnership with TERI School of Advanced Studies, saw participation of about 1,300 students from Delhi-NCR and a total of around 300 innovations.

Advertisement
‘Biodegradable sanitary napkins and a beeswax cloth wrap to replace the commonly used silver foil were the novel utilities that won the sustainable lifestyle challenge .’

Krishi Bhat and Manvi Jain, both from Amity International School, won the top prize for their innovations.


"I have been working on this project since Class 8 because this is something which every woman, urban or rural, goes through," said Bhat, the inventor of biodegradeable sanitary pad , now in Class 9.
Advertisement
"During my research I found that one of the layers in the common pads is treated with a chemical dioxin, which the WHO has listed as a carcinogenic... Though they have now started bleaching the layer with oxygen, it still releases some amount of dioxin.

"So I thought the biodegradable sanitary pads, which are sustainable, are need of the hour," she said.

Departing from a common sanitary pad, Bhat used "cotton fusings" which is a "good absorbent" instead of "dry net" used in former for the outer most layers of the pad of her product.

She said her invention, if marketed, will cost mere Rs 2 and that she is seeking to get a patent for it.

"We may also approach Aanganwaadi and panchayat for their distribution and also for a grant from the government under start up schemes," Bhat said.

While talking about the initiative Klas Molin, Ambassador of Sweden to India said, "We are impressed by the innovative and creative solutions we received for sustainable living. Today's young generation has a great potential to enact positive change and such initiatives can help combining their creativity and dynamism to achieve a sustainable future."

Source: IANS
Advertisement
<< Rare Mineral Found in Plants for the First Time
Why Would a Five Year Old Choose Coca-Cola Over a Lassi? >>

More News on:
Gardening and Horticultural Therapy for the Young and the Old Peripheral Artery Disease (PAD)

Low-cost Jute Based Sanitary Napkins' Manufacturing Paves Way for Women Entrepreneurship
Most of the sanitary napkins present in the market have chemical content in it. Use of jute in ......