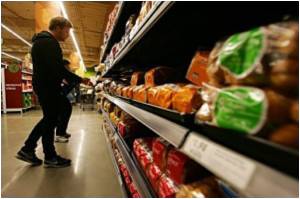 A new material containing an ingredient used to make bricks that shows promise as a transparent coating for improving the strength and performance of plastic food packaging is being reported by scientists.

Called "nano-bricks," the film even looks like bricks and mortar under a microscope, they say. The coating could help foods and beverages stay fresh and flavorful longer and may replace some foil packaging currently in use, they note. The scientists described the new, eco-friendly material here today at the 241st National Meeting and Exposition of the American Chemical Society (ACS).

Ordinary plastic soda bottles tend to loose their fizz after just a few months of storage on grocery store shelves. If manufacturers apply the new coating to these bottles, the material could slow the loss of carbon dioxide gas and help sodas stay bubbly for several more months or even years, the scientists said. The coating could also extend the shelf life for those portable food packages known as MREs (Meal, Ready to Eat) that sustain soldiers in the field, with the added benefit of being microwavable, they noted. Although made to last for at least three years, their shelf life can drop to as little as three months when exposed to harsh conditions such as high heat.


"This is a new, 'outside of the box' technology that gives plastic the superior food preservation properties of glass," said Jaime Grunlan, Ph.D., who reported on the research. "It will give consumers tastier, longer lasting foods and help boost the food packaging industry."

Encyclopedia section of medindia gives an introduction to some super foods that help in preventing and controlling cancer
Advertisement
Grunlan notes that manufacturers currently use a variety of advanced packaging materials to preserve foods and beverages. These materials include plastics that are coated with silicon oxide, a material similar to sand, that provide a barrier to oxygen that can speed food spoilage. Another example is the so-called metalized plastics  plastics with a thin coating of metal or foil  used in many potato chip bags.

These and other packaging materials have drawbacks, Grunlan said. Some plastics crack easily during transport or impact. Metalized plastics are non-transparent  a turn-off to consumers who would like to be able to see their food prior to purchase. The presence of metal also prevents their use in the microwave. Food pouches made out of metal, such as MREs, provide impact resistance, but they lack both transparency and microwavability. Consumers need better food packaging options.

Grunlan has identified a promising alternative in the form of "nano-bricks." The new film combines particles of montmorillonite clay, a soil ingredient used to make bricks, with a variety of polymer materials. The resulting film is about 70 percent clay and contains a small amount of polymer, making it more eco-friendly than current plastics. The film is less than 100 nanometers thick  or thousands of times thinner than the width of a single human hair  and completely transparent to the naked-eye.

"When viewed under an electron microscope, the film looks like bricks and mortar," said Grunlan, an associate professor in the Department of Mechanical Engineering at Texas A&M University in College Station, Texas. "That's why we call it 'nano-bricks'."

When layered onto existing plastic packaging, it adds strength and provides an improved barrier to oxygen, he said. Grunlan demonstrated in lab studies that the film is 100 times less permeable to oxygen than existing silicon oxide coatings. This means that it's also likely to be a better oxygen barrier than a metal coating, whose permeability is similar to that of silicon oxide, the scientists noted.

"Others have added clay to polymer to reduce (gas) permeability, but they are thousands of times more permeable than our film," Grunlan said. "We have the most organized structure  a nano-brick wall  which is the source of this exceptional barrier. This is truly the most oxygen impermeable film in existence."

Grunlan is currently trying to improve the quality of the film to make it more appealing to packaging manufacturers, including making it more moisture resistant. He envisions that manufacturers will dip plastics in the coating or spray the coating onto plastics. In the future, he hopes to develop nano-brick films that block sunlight and contain antimicrobial substances to enhance packaging performance.

Researchers worldwide have discovered that eating fish regularly is good for health. Regular consumption of fish may reduce the risk of diseases such as asthma, prostate cancer and eyesight.
Advertisement
<< Research Zeros in on The Gene Processes That Drive Acute My...
Changes in Incidence of End-Stage Renal Disease from Lupus ... >>

Hearing Loss Calculator Pregnancy Confirmation Calculator Blood Pressure Calculator Vent Forte (Theophylline) Drug Interaction Checker Accident and Trauma Care Find a Hospital The Essence of Yoga Drug Side Effects Calculator Nutam (400mg) (Piracetam)
This site uses cookies to deliver our services. By using our site, you acknowledge that you have read and understand our Cookie Policy, Privacy Policy, and our Terms of Use