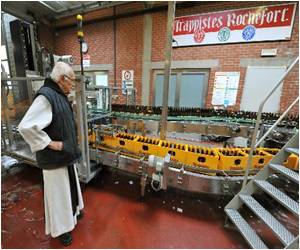 In the capital of Germany -a land of beer-lovers, young craft brewers are taking on the mass market, promising to put diversity and flavour back into the national beverage.

Upstart micro-brewers have popped up in trendy Berlin neighbourhoods, producing flavours that rebel against the uniformity of the major brands crowding supermarket shelves.

A Scottish brewery claims to have come up with the world's strongest beer, with its Snake Venom boasting of an ABV of 67.5 percent.
Advertisement

The new amber revolution aims to go back to basics and revive a once-rich beer tradition in Germany and its former and present capital city, which a century ago boasted 95 breweries.

Starkenberger Castle in Austria has 7 pools to offer, all of which are filled with beer
Advertisement
But the scent of hops has long since disappeared from them, as the neo-Gothic architectural marvels have been transformed into cultural centres, design studios, lofts and luxury apartments.

While Germans today consume some 106 litres (186 pints) of beer per person per year, an amount topped only by Czechs and Austrians according to industry figures, the market has long been dominated by major industrial brands.

Berlin's big beers are now produced in a plant of the Radeberger Group, a subsidiary of food giant Oetker, the German market leader with some 40 labels.

The Berlin counter-movement, inspired by the US-born "craft beer" trend, has seen a mushrooming of "Mikrobrauereien" (micro-breweries) and "Kiezbrauereien" (neighbourhood breweries).

"The market is really alive and it's growing virally," said Mark Hinz, 44, co-organiser of the first Berlin craft beer festival this year held with 15 brands in Berlin's club district of Friedrichshain.

"People are happy to discover beers that have taste and show the diversity of what can be done compared to what's found in a supermarket," he said of the new craft beer "scene" as if speaking about techno music.

"I don't want to work in big industry and I don't want to leave Berlin," said Wilko Bereit, 38, who created the local Rollberg Bier in 2009 together with his business partner Nils Heins.

"We don't idle, it's a lot of work," added the hoodie-wearing brewer with a strong Berlin accent.

Last year, it sold 180,000 litres to 46 bars and restaurants in and around Berlin, he said, adding with some pride that "at the Rollberg Brauerei, we really make traditional German beer".

To drive home the message, his brewery is located in the basement of the famed old Berliner Kindl brewery in what is the working class-meets-hipster district of Neukoelln.

"Berlin was once an incredible metropolis of beer and, little by little, this is happening again," Hinz told AFP.

Most of the young guns of beer learnt the craft at Berlin's Technical University, which offers classes in brewing and beverage technology.

But Berlin has also attracted talent from abroad, including three US brewers who founded the "Vagabund Brauerei".

Self-taught, they began to brew beer for themselves and their friends, driven by a desire to rediscover the original taste of American beer.

"We were very surprised by the limited choice here," said co-founder Matt Walthall, recalling the difficulty of finding a Belgian, French or US label in a German supermarket.

"At the moment we brew once a week and only 200 litres, but after July, we will develop," said the thirtysomething entrepreneur.

As for the taste of Vagabund, he said it is mainly American, but with a German influence.

Daily Calorie Requirements The Essence of Yoga Drug Side Effects Calculator Color Blindness Calculator Turmeric Powder - Health Benefits, Uses & Side Effects Loram (2 mg) (Lorazepam) Indian Medical Journals Sinopril (2mg) (Lacidipine) Find a Doctor Noscaphene (Noscapine)
This site uses cookies to deliver our services. By using our site, you acknowledge that you have read and understand our Cookie Policy, Privacy Policy, and our Terms of Use