Beijing Supports Chinese Teaching in the US 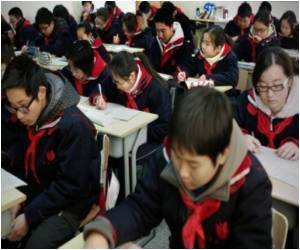 When she was 16, Susan Wang was unable to speak English.

Now 49, she heads a school offering US children a similar experience, plunging them into a Chinese world.

And her establishment is part of a rapid expansion of "immersion" Mandarin language programs in the United States, helped notably by Beijing providing low-cost native-speaker teachers to cash-strapped US schools.


Pupils as young as five at her Broadway Elementary School in Venice, west of Los Angeles, take classes entirely in Chinese, in a project so successful that it is having to move to a new campus.
Advertisement
"The single most exciting thing has to be watching the kids learn, and how they learn, and how fast they pick up another language, it's just amazing," she told AFP, in a pause from her busy day at the bustling local school.

"I didn't speak English when I came, so when it comes to dual language and language learning ... it's something close to my heart," she added.

Mandarin teaching has expanded nationwide over the last decade, in contrast to other foreign languages which have steadily decreased, according to data compiled by the Center for Applied Linguistics (CAL).

"Mandarin is really taking off ... Chinese was one of the few languages that increased, most other language offerings decreased, including French, German, and Japanese," Nancy Rhodes of the Washingtonp DC-based CAL told AFP.

Beijing's education ministry is also helping, by sending native-speaker teachers effectively for free to work in US schools.

California has been in the forefront, both geographically and historically, ever since huge numbers of Chinese workers helped build the US railroad system. San Francisco and LA have the biggest Chinese communities after New York.

Traditionally families with one or both parents from Chinese backgrounds have put children into Mandarin-language schools to bolster their cultural "heritage," or ability to communicate with grandparents back home.

But increasingly parents cite economic and career-prospect reasons for having their offspring able to speak Chinese.

"I wanted them to have the opportunity to be able to leave the US if they wished to go and seek employment somewhere else," said Julie Wang, an Australian who came to the United States when she was 25.

"I did that myself ... I came out here. I think it's a great opportunity for them to experience different cultures, different ways of life, not just the one that they grew up in," she added.

In the classroom at Broadway, the linguistic immersion is total. The walls are plastered with pictures and signs entirely in Chinese, the text books are in Mandarin, and the teacher will not accept a word of English.

And while some children have a Chinese parent or grandparents, the eager faces around the room are from all backgrounds, from African American and white Caucasian to Latino youngsters.

Many don't speak a word of Mandarin when they arrive. "At the beginning it is difficult," said kindergarten teacher Carol Chan, adding at first she has to use a lot of gestures, visual aids -- and a lot of games.

"I use a lot of pictures and ... a lot of music. It is difficult. because they don't understand a word I'm saying. But through physical language and gestures, they really catch on. And they're having fun with me too!"

First-grader Grace Ehlers says it was tough at first, but now she is equally confident in both languages.

"It's the same, or maybe a little bit easier in Chinese because my dad speaks many languages and sometimes he teaches me a little bit of it," she said, when asked to compare classes in English and Mandarin.

The school's principal says the availability of free Chinese teachers was crucial to Broadway Elementary's decision to offer the Mandarin language immersion program.

"I am Chinese, born and raised in Taiwan. But that has nothing to do with why I'm here doing this program.

"The Chinese volunteer teachers were what we were able to get. Had we been able to get free French teachers, or free Spanish teachers, we'd be teaching those," she added.

According to CAL, there were 74 Mandarin language immersion programs in the United States in 2008, the last time the data was updated. "I do know that there are more programs not yet listed," said Rhodes.

Overall Spanish has the most immersion programs, with 45 percent of the total, followed by French on 22 percent, Mandarin on 13 percent, Hawaiian with 6 percent, Japanese 5 percent and German 3 percent.

"In the past Chinese has traditionally been taught more on the West Coast and in major cities, but we're seeing more Chinese programs cropping up all over the country now," she said.

"Even smaller districts that we work with ... that are starting up elementary school language programs are considering between Spanish and Chinese," she said, adding that the expansion will likely continue.

Early Development of Language Skills Help Kids to Cope Better With Anger
Children who develop language skills faster are able to cope with anger better than those kids who ....