Be Prepared - For the Apocalypse 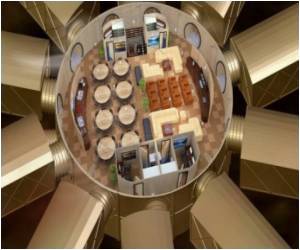 From the outside, Jerry Erwin's home in the northwestern US state of Oregon is a nondescript house with a manicured front lawn and little to differentiate it from those of his neighbors.

But tucked away out of sight in his backyard are the signs of his preparations for doomsday, a catastrophic societal collapse that Erwin, 45, now believes is likely within his lifetime.

How Do You Protect Yourself During an Apocalypse?

An American business seems to have come out with an idea to protect onself during an apocalyptic event.
Advertisement

"I've got, under an awning, stacks of firewood, rain catching in barrels, I've got a shed with barbed concertina wire, like the military uses," he told AFP.


He and his wife also have also stockpiled thousands of rounds of ammunition and enough food for about six months.

"Several years ago I worked on paying off the house, replacing all the windows, and just very recently, I'm proud to say, we've replaced all our exterior doors with more energy-efficient ones, with as much built-in security features as I could get," he told AFP.

Reports indicate that the 2012 end of the world prediction made by the ancient Mayans has sparked real fears, with some people displaying end times anxiety.
Advertisement
"Plus I'm going to be adding some more structural improvements to the door frames to make it hopefully virtually impossible to take a battering ram to them."

Erwin and others like him in the United States and elsewhere see political upheaval and natural disasters as clear signs that civilization is doomed.

"We're hitting on all cylinders as far as symptoms that have led other great powers to decline or collapse: resource depletion, damage to the environment, climate change, those are the same things that affected other great societies," he said.

For Erwin, the decline is irreversible and the best approach is to prepare for the inevitable.

His pessimism is shared by a wide range of people, from left-wing environmentalists who believe climate change and capitalist greed will doom human society to Christian fundamentalists who think sin will do the same.

They label themselves "preppers," "doomers," and "survivalists," and take a variety of different approaches to the same question: How best to prepare for the coming apocalypse?

Jim Rawles, who Erwin describes as "the patron saint of survivalism," prefers an isolationist, Christian-influenced approach.

He homeschooled his children, declines to say where he lives, and advises readers of his website survivalblog.com to "relocate to a safe area and live there year-round."

"When planning your retreat house, think: medieval castle," he adds, extolling the benefits of using sandbags to protect any new home.

Rawles, like many on the most conservative end of the survivalist spectrum, is also anti-tax, pro-gun rights, and suspicious of anything that smacks of socialism.

But the survivalist movement also includes left-wing community activists, who are devoted to living off the land and have never fired a weapon, and people like Chris Martenson, who quit a job with a six-figure salary that he felt was "an unnecessary diversion from the real tasks at hand."

He began growing his own food and developed a "Crash Course" that urges people to better prepare for societal instability. He also took over management of his investments and boasts of a 166 percent return on his portfolio.

For Martenson, the wake-up call was the September 11, 2001 attacks, when he felt gripped by uncertainty and totally unprepared.

Erwin had always felt that society would eventually disintegrate, but he and many other US survivalists say the dysfunctional response to the 2005 Hurricane Katrina was what spurred them to action.

"I thought, okay, things are not going to get better... maybe this society, our civilization, the American empire, will collapse during my lifetime," Erwin said.

For John Milandred, no single event pushed him to leave his suburban home and set up a farm in Oklahoma.

"We just got fed up of working all the time to pay bills and not accomplishing anything," he said.

A member of the American Preppers Network, Milandred said he and his wife aspired to "grow our own foods and be self sufficient... to live like the pioneers, like our great-grandparents."

It is unclear how many people subscribe to the lifestyle, but there are hundreds of websites devoted to the movement, and Erwin's surburban-self-reliance.com attracts visitors from around the world.

The global financial crisis has increased interest in survivalism "bigtime," Erwin said, but he feels sorry for latecomers to the movement.

"We'll help them if we can," he said. "But a lot of people are climbing on board at the last minute and its going to be hard for them."

Norway has begun to store all the crop seeds available across the world just to ensure there is something to fall back on in case of a major disaster.
Advertisement
Advertisement
This site uses cookies to deliver our services.By using our site, you acknowledge that you have read and understand our Cookie Policy, Privacy Policy, and our Terms of Use  Ok, Got it. Close
×

Be Prepared - For the Apocalypse Personalised Printable Document (PDF)