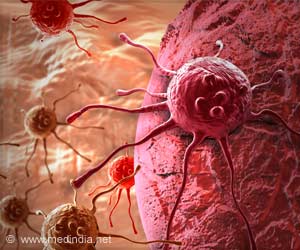 Basal cell tumors tend to grow back when patients stop their drug treatment. The mechanism of action of drugs behind the recurrence of tumor has been identified, reveals a new study.

Basal cell carcinomas are incredibly common somewhere between 1 million to 3 million diagnosed each year and rarely life-threatening. They're most often removed through surgery. But for a small minority of patients, they can be a bigger problem.

Advertisement
‘When patients stop taking the drug, the tumor often grows back. Hence, developing a drug that can eliminate persistent tumor cells is essential.’

In some cases, the cancer cannot be surgically removed, often because of where it's found. A small portion of patients have an inherited condition called basal cell nevus syndrome, or Gorlin syndrome, which causes hundreds of basal cell tumors to develop over their lifetime.


Enter the drug vismodegib. It's an early success story among targeted therapies, developed to hit a key pathway in basal cell carcinoma called Hedgehog. By blocking Hedgehog, the cancer cells die.
Advertisement
But there's one catch: when patients stop taking the drug, the cancer often grows back at the same site.

"It's a very effective drug, but many patients have to stay on it for their entire life," says Sunny Wong, Ph.D., assistant professor of dermatology and of cell and development biology at Michigan Medicine. "We think vismodegib drives a subset of tumor cells into a state of dormancy, where they neither grow nor die."

In a study published in Cancer Cell, researchers describe two types of cell populations in basal cell tumors. The outer edge of the tumor is lined with cells that persist even in the face of Hedgehog blockade. The inner cells, on the other hand, are about three times more likely to undergo cell death from vismodegib treatment.

"What was most fascinating was that the relative location of a cell within a tumor can have such a big effect on its sensitivity to drug treatment," says lead study author Markus Eberl, Ph.D., a former postdoctoral fellow at Michigan Medicine.

The difference stems from the Notch pathway and how each type of cell activates it. Higher levels of Notch were detected in the inner cells, while the outer cells had lower levels of Notch. When the researchers shut off Notch completely, tumors were more likely to persist despite vismodegib treatment. When they turned on Notch, tumors shrank. The work was done in mice.

The outer cells are anchored to the tumor's basement membrane, where Hedgehog signaling is high and Notch signaling is low. The researchers explain that this pattern allows cancer cells to persist in a largely dormant state while the patient takes the Hedgehog-inhibiting vismodegib. Once the drug treatment stops, the dormant cells re-activate.

Notch plays a key role in normal skin, and is the most common mutation in skin cancers, seen in up to half of patients.

Fewer than 1 percent of patients with basal cell tumors will need vismodegib.

"The side effects of vismodegib are not life-threatening, but there are concerns," Wong notes. Many patients experience loss of taste, muscle cramps, weight loss and fatigue. The side effects drive some patients to discontinue the drug.

Drug resistance and tumor persistence are both challenging issues with Hedgehog-blocking treatments. This is the first study to address persistence and explain how the drug works and, in some cases, falls short.

The researchers suggest the key might be in developing a drug that changes the tumor architecture so the persistent outer cells respond more like the inner cells. Additional research underway is the mechanisms of why Notch affects cell death, searching for proteins or molecules that may be at play.

Basal and Squamous Cell Skin Cancers On the Rise
Recently, two types of skin cancers (basal tumour and squamous tumors) have been on the rise, say .....

An Innovative Photothermal Technique can Cause Direct Damage to the Tumors
Nanorods made of bismuth sulfide can now help destroy tumors by heat. This method could be an ......

Genomic Profiling Improves Treatment of Brain Tumors in Kids
Genomic profiling can be readily integrated into the routine clinical workflow for children with ......