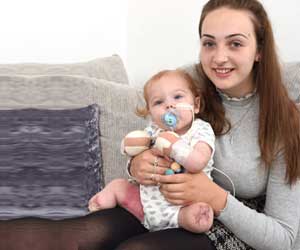 Brave baby survives despite losing all four limbs to sepsis that started as a simple throat infection that went undiagnosed.

Abigail Wardle, a 23-year-old mum, was horrified to see that her sons' legs self-amputated and came off in her hands as she held him in the hospital bed. Doctors warned her that Oliver might not survive.
Advertisement
‘Little tot pulls through despite losing four limbs to sepsis and may even have his prosthetic legs fitted soon.’
Read More..

She has no regrets as she says, that other people might feel sorry for them. But she considers herself as the luckiest mum because although Oliver does not have any hands or feet, he is still a smiley, brave little boy.


While Abigail was scared, little Oliver was brave and motivated his mom to be brave too.

What began as a sunken soft spot made Abigail take her son to the GP, assuming that it was dehydration. Her GP asked her to give Fluids and some medication. The following day, when his condition worsened, she took him to another Out of hours GP.
Advertisement
Doctors then diagnosed the condition as sepsis that had developed from an undiagnosed throat infection. But Oliver had not shown signs of the throat infection. Doctors treated Oliver for sepsis, but the sepsis caused his limbs to turn black and die off.

While the medics tried to save the limbs, Abigail could see that Oliver's limbs were coming off.

Abigail says how he seemed relieved once the legs were removed. He became full of life and so happy.

After being discharged from the hospital, Oliver has been very resilient, trying to roll over and play with toys using his stumps.

Abigail, the mother of the brave little child, is happy she at least has a son. Abigail from Cleethorpes, Lincs has chosen to speak about her harrowing story in order to educate other mum's and GPs who might not have specialized pediatric training to spot sepsis early.

Sepsis is a medical emergency, a life-threatening condition. The body normally releases chemicals to fight infection. But it happens when the immune system overreacts to an infection and starts to damage one's own body tissues and organs. This triggers changes that damage multiple organ systems. If sepsis is not treated early, it can lead to septic shock. Sepsis is difficult to spot, especially in babies and children, and people unable to communicate.

Source: Medindia
Advertisement
<< Multidisciplinary Management of Ovarian Cancer in Women With...
Childhood Accidents Can Be Prevented Through Psychology >>

Neutropenic Sepsis
Neutropenic sepsis is a potentially life-threatening condition when a patient with low neutrophil .....

Sore Throat Symptom Evaluation
Sore throat is a common symptom that usually affects people during a weather change. It is often ca...