Baby Boy Resembles a Pinocchio With Brains Growing On His Nose 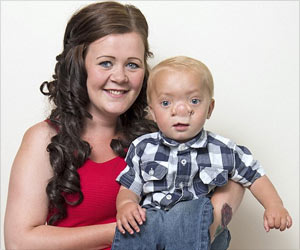 Birth defects are common and many babies are born with some deformities. A 22-year-old mother has been blessed with a beautiful boy, Ollie but with a birth defect termed as Encephalocele. It is a rare type of neural tube defect that affects the brain.

During an MRI scan, doctors first detected soft tissue growth on the 21-month old baby's face. But they did not know how it will develop.

Prenatal screening test analyzes the mother's blood for certain fetal abnormalities as the blood contains fragments of placental and maternal DNA.
Advertisement
‘Encephalocele occurs when the neural tube does not close completely during pregnancy. It is described as a sac-like protrusion of the brain, resulting in an opening between the forehead and the nose or the back of the skull.’

Amy poole, his mother was shocked to see an enormous golf-ball sized lump on his nose. She decided to love her baby despite of his defect and was only afraid of people who will start bullying his baby.


As he grew, his lump on his nose also got bigger in size, which resulted in breathing difficulties. Therefore, doctors performed a two-hour-surgery on his nose. They cut open Ollie's skull to remove the excess sac of brain fluid and rebuilt his nose.

One-year-old Gianna Masciantonio's stunning recovery from a brain tumor that threatened her life at birth is due to a divine intervention by Pope Francis.
Advertisement
After the surgery he is completely fine, though his bulb remains the same. Amy hopes that he will not be bullied in school. Doctors are waiting for him to grow up completely to see the extent of his skull growth before performing any more intensive surgery.

Amy said, "To me, Ollie is perfect. He is my little real-life Pinocchio and I couldn't be prouder of him. Ollie will probably never look like all the other children and I'm terrified that he will be bullied at school. But he is such a lovely boy that it's impossible not to adore him."

The center would provide counseling to parents and provide referral support to children up to six years. The aim of the center is to create a healthy society.
Advertisement
<< Researchers Discover New Method for Early Detection of Deadl...
Vegan And Healthy Diets Can Be More Harmful To The Environme... >>