Artist Draws Three Cities With the Help of Robots 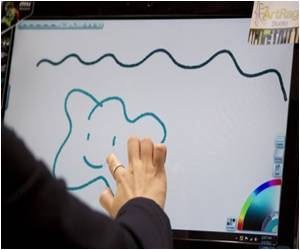 Alex Kiessling worked in Vienna while a pair of orange industrial robots in London's Trafalgar Square and Berlin's Breitscheidplatz drew exactly the same picture of three human faces with the help of satellite transmissions.

Spectators in the German and British capitals could follow the artist in Vienna courtesy of giant screens while livestreams kept audiences in Vienna up to date with events in Berlin and London.


"The drawings done by the robots are still a part of the original I create but they complement them and also serve a different function," Kiessling said.

Artists Develop Food Helmet That Keeps You Alive by Feeding You Algae
A suit that grows food while the person donning it, goes about their daily routine was developed by ...