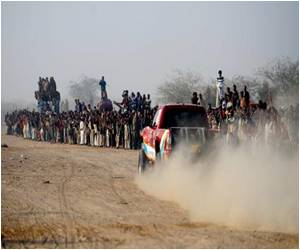 The military operation in Pakistan may be making headway in clearing militant hideouts, but it has shattered the dreams of a father of 36 children of taking a fourth wife.

Gulzar Khan is one of hundreds of thousands of people who have fled the North Waziristan tribal area since the army moved in to clear longstanding bases of Taliban and other militants.


Escaping the military advance meant leaving the 35-room house he shares in the North Waziristan village of Shawa with around 100 family members, including wives, children and grandchildren.


The 54-year-old grumbled that paying to transport his brood used up the cash he had set aside for his fourth marriage.

"The money I had saved was consumed in relocating my family from Shawa to Bannu and now I have again started saving and waiting for the operation to conclude," he told AFP.

Islamic law permits men to take up to four wives and in Pakistan's deeply conservative northwest, large families are the norm.

But after giving birth to a dozen children each, Khan said, his wives had told him enough was enough.

"I was planning to have a fourth marriage because now my wives have boycotted me and told me 'no more children'," Khan said.

"They do not allow me to go near them, but I have desires I want to fulfil."

Khan was 17 years old when he married his 14-year-old cousin in Shawa. They had eight daughters and four sons, but after eight years, the amorous tribesman got married again, to a 17-year-old.

"I was not satisfied and needed more of it -- I mean the love-making," Khan told AFP at his 17-room house in the northwestern town of Bannu, where the bulk of people displaced by the military operation have taken refuge.

"I do not indulge in adultery and sinful acts so I satisfy my natural desires lawfully by marriage," said Khan, who worked as a taxi driver in Dubai from 1976 to 1992.

Khan's third wedding came when he married his brother's widow when he was killed in a dispute just a month after tying the knot himself.

Two of his sons now work as drivers in Dubai and the money they send home helps support the extended family, along with income from Khan's farmland in Bannu and Shawa.

He said there were no disputes between his three wives, all living under the same roof, but he admitted he struggled to remember who was who's mother.

"I can tell you that he or she is my child, but I cannot tell with all of them who is his or her mother," Khan said.

As tribal custom forbids women from speaking to men outside their family, AFP's reporter was unable to seek the views of Khan's wives on the matter.

Khan said he had no problem feeding and clothing his family, but with so many people around, there was little privacy.

"Often there are two to three kids lying around me when I go to sleep, so it's difficult to have a private moment with my wives," Khan said.

Asked if he used any drugs like Viagra to perform, Khan said that he never felt the need.

"I had a heart attack 12 years ago and also have an ulcer, and my doctor had advised me to stay happy," Khan told AFP.

"I am happy only when I perform my conjugal rights."

Pakistan's 180 million-strong population is growing by more than two percent a year, according to the United Nations Population Fund, which said in late 2012 that a third of Pakistanis have no access to birth control.

Some observers have warned that unless more is done to slow the growth, the country's natural resources -- particularly water -- will not be enough to support the population.

But Khan's 14-year-old son Ghufran has no such fears.

"God willing I will also have several marriages and produce even more kids than my father," he told AFP.

Dreams Demystified
Dream theories and meaning of dreams abound while our dreams continue to intrigue us, puzzle us, even embarrass us, and we often wonder if our dreams have a bearing on something in our real life.
READ MORE