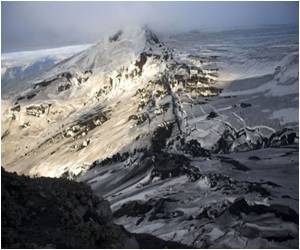 Sulphate dust deposits drilled deep from the West Antarctic ice sheet have provided a glimpse into the history of over 2,000 years of volcanic eruptions.

A team of scientists led by Michael Sigl and Joe McConnell of Nevada's Desert Research Institute (DRI) has completed the most accurate and precise reconstruction to date of historic volcanic sulfate emissions in the Southern Hemisphere and Sigl said that this record provided the basis for a dramatic improvement in existing reconstructions of volcanic emissions during recent centuries and millennia.

While Mount Yasur in Vanuatu explodes, throwing up lava and clouds of hot ash, tourists stand at its rim in the warm gust of air, watching the volcanic activity in fascination.
Advertisement

The study incorporated 26 precisely synchronized ice core records collected in an array of 19 sites from across Antarctica and it is the first annually resolved record extending through the Common Era (the last 2,000 years of human history). It involved collaborating researchers from the United States, Japan, Germany, Norway, Australia, and Italy.


The research also found that the two largest volcanic eruptions in recent Earth history (Samalas in 1257 and Kuwae in 1458) deposited 30 to 35 percent less sulfate in Antarctica, suggesting that these events had a weaker cooling effect on global climate than previously thought.

The new record is published in the online edition of Nature Climate Change.

Research Suggests Volcanoes Set Their Own Rules for Eruption

The reason why small and giant volcanoes have different frequency and magnitude while erupting has been unearthed by researchers.
Advertisement
<< Court Crackdown on Consumption of Endangered Animals in Chi...
Physicist Says AI Will Take Over Humans Over the Next Three... >>

Volcanoes Not as Guilty As Humans When It's About CO2 Emissions