Analysis Unsupportive of Genetic Test Prior to Anti-Clotting Drug Use 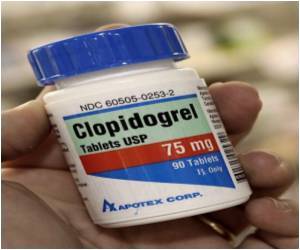 In spite of the U.S. Food and Drug Administration (FDA)'s recommendation that a certain type of genetic testing (for the genotype CYP2C19) be cautiously observed prior to prescribing the drug clopidogrel to classify individuals who may be less responsive to the medication, a review and analysis of previous studies failed to find an overall significant association between the CYP2C19 genotype and cardiovascular events, according to a study in the December 28 issue of JAMA.

Clopidogrel is an antiplatelet drug used by approximately 40 million patients worldwide to treat or prevent atherothrombotic (blood clot from thickening of inner lining of arteries) events and after percutaneous coronary revascularization (such as balloon angioplasty). "Despite the overall benefit, some individuals may be less responsive to clopidogrel than others because clopidogrel is a prodrug activated by several enzymes, including CYP2C19, and common genetic variation in CYP2C19 alters enzyme activity," according to background information in the article. The American Heart Association and American College of Cardiologists have argued evidence is insufficient to support CYP2C19 genotype testing.

Michael V. Holmes, M.B.B.S., M.Sc., of University College London, and colleagues conducted a systematic review and meta-analysis to assess the strength and quality of evidence on the association of CYP2C19 genotype with responsiveness to clopidogrel. The researchers conducted a search of the medical literature and identified 32 studies that met criteria for inclusion. These included studies that reported clopidogrel metabolism, platelet reactivity or clinically relevant outcomes (cardiovascular disease [CVD] events and bleeding), and information on CYP2C19 genotype.


The 32 studies included 42,016 patients reporting 3,545 CVD events, 579 stent thromboses, and 1,413 bleeding events. Six studies were randomized trials ("effect-modification" design) and the remaining 26 reported individuals exposed to clopidogrel ("treatment-only" design). In treatment-only analysis, individuals with 1 or more CYP2C19 alleles (an alternative form of a gene) associated with lower enzyme activity had lower levels of active clopidogrel metabolites, less platelet inhibition, lower risk of bleeding, and higher risk of CVD events. However, there was evidence of small-study bias, the authors write. When analyses were restricted to studies with 200 or more events, the point estimate was lessened.

Heart attack is the death of the heart muscle due to loss of blood supply. Simple guidelines to avoid heart attack are listed.
Advertisement
In effect-modification studies, CYP2C19 genotype was not associated with modification of the effect of clopidogrel on CVD end points or bleeding. A limitation included selective outcome reporting.

"Despite associations between CYP2C19 genotype, clopidogrel metabolism, and platelet aggregation, this systematic review and meta-analysis does not demonstrate a clinically important association of genotype with cardiovascular outcomes with the possible exception of stent thrombosis," the researchers write.

"Our appraisal has identified issues pertaining to the design and analysis of pharmacogenetic studies that are important in the understanding of the significance of the CYP2C19 genotype."

Steven E. Nissen, M.D., of the Cleveland Clinic Foundation, writes in an accompanying editorial that several factors led to the unrealistic expectations of the effectiveness of CYP2C19 genotyping for clopidogrel, and that a large randomized controlled trial is needed to adequately test the clopidogrel pharmacogenomic hypothesis.

"In the absence of such a study, physicians should use CYP2C19 or platelet reactivity testing rarely, if ever, and interpret the results with caution. It is still likely that pharmacogenomics has a bright future in cardiovascular medicine, but the pharmacogenomics approach to drug therapy must undergo the same rigorous testing for efficacy and cost-effectiveness that is required for other therapies. Overzealous adoption based on limited biochemical data does not serve the public interest."

Genetic testing can help determine whether heart surgery patients benefit from the popular anti-platelet drug clopidogrel, which has been effective for some but carries major risks,
Advertisement
<< Mutation in Gene Critical for Human Development Linked to Ar...
Venezuela Extends PIP Breast Implants Removal >>