Airline Passengers in Philippines to be Checked for MERS 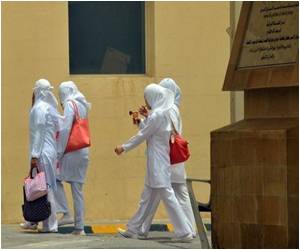 More than 400 passengers in Philippines who shared an airline flight with an MERS infected virus were asked to check with a health department.

The move was a precautionary measure to ensure none of them were infected by the man who has since been quarantined along with his family, a health official said.

MERS Claims Life of a Foreigner in Saudi Arabia

The authorities of health ministry of Saudi Arabia have sought to calm fears over the spreading respiratory illness after a foreigner died from MERS.
Advertisement

Passengers on the Etihad Airways flight on April 15 were told to call health department emergency numbers listed in the media even while the department tries to track them down, said Lyndon Lee Suy, the spokesman for the department's emergency service.


"We want to make sure that none of them would have gotten the virus. We don't want to miss a single case," he told AFP.

The 418 passengers will be asked if they have fever or flu-like symptoms that might be signs of the sometimes fatal MERS.

Amid criticism faced that Saudi Arabia was not doing enough to contain the deadly MERS virus, the country has just reportedly confirmed an outbreak of the disease.
Advertisement
The spokesman could not immediately say how many of the passengers had already been contacted.

A Filipino who arrived on the flight from the United Arab Emirates has tested positive for the MERS (Middle East Respiratory Syndrome) virus, the department announced on Wednesday.

The World Health Organisation said last Friday that it had been told of 212 laboratory-confirmed cases of MERS infection worldwide, of which 88 had proved fatal.

One of six Filipino paramedics in the UAE who have been infected by the MERS coronavirus has died from the respiratory disease, the UAE has confirmed.
Advertisement
<< Anti-seizure Drug may Reduce Alcohol Consumption
Boosting Depression-Causing Mechanisms in the Brain Increas... >>