After Working Together, Young Kids Prefer to Share Prizes 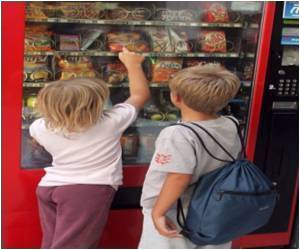 Young children choose to share prizes after working together, says a new study.

In the study, three-year-old children shared with a peer after they worked together to earn a reward, even in situations where it would be easy for one child to keep all of the spoils for himself.

The new research was inspired by work in chimpanzees that found their cooperation regularly breaks down.


Other research in humans has suggested that young children might not be very good at sharing, but this has usually depended on asking the children what they'd do in hypothetical situations, or giving them one shot at dividing up resources.
Advertisement
For this study, researchers wanted to take a more thorough look at how young children share, particularly in a situation where they had to work together for a common goal. They had pairs of children complete a task in which they had to collaborate to get a prize. The prize-gummy bears, stickers, or other items-was piled on a board with wheels inside a transparent box. If only one child pulled on a rope, the board wouldn't move, but if they pulled together, they could bring it toward them and reach the food or toys through windows in the transparent box. Sometimes there was only one window to reach through; sometimes there were two. But even when there was only one window, which meant that one child could have monopolized the prizes, the children almost always shared equally. Each pair of children was tested several times.

"We were surprised that this rule was so strict-that equality was so strongly preferred," said Felix Warneken of Harvard University, a coauthor of the study.

And the children shared virtually without conflict.

"It was rarely the case that one took all the resources and the other kid had to say, 'Hey, that's not fair.'" Sometimes, if one child didn't take their half of the spoils immediately, the other would even point it out.

Source: ANI
Advertisement
<< Brain's Development Affected by Partnership of Genes
Casino Gamble Pays Off One Year on in Singapore >>

Selfie Addiction Calculator Noscaphene (Noscapine) Accident and Trauma Care Color Blindness Calculator Iron Intake Calculator Pregnancy Confirmation Calculator Drug Side Effects Calculator The Essence of Yoga Daily Calorie Requirements Drug - Food Interactions
This site uses cookies to deliver our services.By using our site, you acknowledge that you have read and understand our Cookie Policy, Privacy Policy, and our Terms of Use  Ok, Got it. Close
×