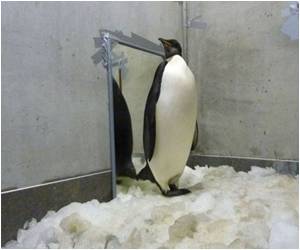 This is according to a study published July 30, 2014 in the open-access journal PLOS ONE by Livio Favaro and colleagues from University of Turin, Italy.

An avian influenza virus has been identified by an international team of researchers in a group of Adélie penguins from Antarctica.
Advertisement

African penguins vocalize to communicate with their parents, mates, and colony members; however, only basic descriptions of their calls currently exist. To further observe their vocal behavior, the authors of this study collected, categorized, and acoustically analyzed hundreds of audio and video vocal recordings from a large captive colony of penguins in Italy. In addition, they identified the behavioral contexts in which calls were made.


Results show that four basic vocalizations can be found in the auditory repertoire of the adult African penguin: a contact call emitted by isolated birds, an agonistic call used in aggressive interactions, an ecstatic display song uttered by single birds during the breeding season, and a mutual display song vocalized by pairs at their nests. The authors also identified two distinct vocalizations interpreted as begging calls by nesting chicks (begging peep) and unweaned juveniles (begging moan). Since the colony is captive, the authors can't be sure they've identified all possible vocalizations, but they suggest this analysis helps to standardize known vocalizations that can be used in further study of these endangered seabirds.

Global Warming may Cause Emperor Penguins to Vanish: Scientists

South Korean animator Choi Jong-Il knew he had a hit on his hands when Pororo the penguin hopped onto TV screens back in 2003.

Drug Interaction Checker Iron Intake Calculator Accident and Trauma Care Color Blindness Calculator Post-Nasal Drip Sanatogen Drug - Food Interactions Noscaphene (Noscapine) Selfie Addiction Calculator The Essence of Yoga
This site uses cookies to deliver our services. By using our site, you acknowledge that you have read and understand our Cookie Policy, Privacy Policy, and our Terms of Use