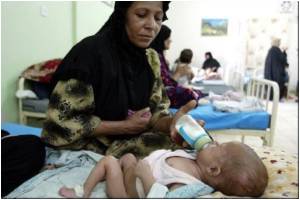 Five million dollars (four billion euros) have been pledged by leaders of the Group of Eight industrialized countries to fight against maternal and child illness.

But the proposals faced an immediate barrage of criticism from development groups, who accused leaders of trying to mask previous unfulfilled promises to help millions out of poverty.


"We are committed to moving the world towards the day when women in developing countries will not die or suffer disabilities from pregnancy or childbirth," he said.

Nutritional Assessment Calculator helps to find out if you child is undernourished or malnourished.
Advertisement
But anti-poverty activists were unimpressed.

"The G8 is trying to quietly shelve their promise to deliver 50 billion dollars in extra aid by this year," said Oxfam's Mark Fried. "Leaders must not be allowed to shirk their responsibility to the world's poor."

Nevertheless, Harper insisted: "The skepticism this time is not warranted. I think any money we get here pledged to this particular initiative, I am confident that that will be delivered.

"I don't think you will again see leaders go out and make pledges that they don't intend to keep or that they really haven't thought about very thoroughly."

The Canadian premier admitted there may have been some reluctance to pledge larger sums as many of the economies represented around the table still labor under the weight of the worst financial crisis in a generation.

Canada, which escaped the world financial crisis largely unscathed, pledged around one billion dollars of new funds, a full 20 percent of the total.

But, as high-profile UN Millennium Development Goals slip beyond reach, including the goal of reducing maternal mortality by three quarters, pressure is building for rich countries to act regardless of budgetary constraints.

"Canada has managed to find at least 1.1 billion to spend on a week of G8 and G20 security, and 1.1 billion over five years for health in poor countries," said Guillaume Grosso of development lobby group One.

"I sincerely hope that other countries will also follow Canadian examples, but we need much, much more at this time," he told Canadian broadcaster CBC.

"Despite the economic and financial crisis, industrialized countries, particularly G8 and other OECD countries, they should keep their promises which they have already made."

This scoring system is used to identify babies at risk for complications or bad outcome from delivery during the early minutes of their life and determine if any medical intervention is needed immediately.
Advertisement
Advertisement