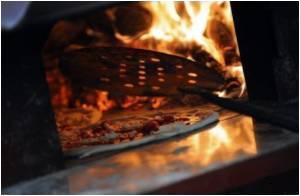 A 2,520-calories pizza burger is to be launched by the fast food chain, Burger King.

'Pizza Burger' will be covered in mozzarella, pepperoni and pesto and marinara sauce.

The NY Pizza Burger, due to debut next month at Burger King's new New York flagship Whopper Bar restaurant, is four times the size of the chain's Whopper, comes on a nine-and-a-half inch sesame bun, and is just over the 2,500 daily calorie allowance for men.


The Pizza Burger contains 144g of fat, 59g of which is saturated, 3,780mg of salt, which is more than double the daily limit for adults, and will cost 13 dollars, or 8.40 pounds, reports the Telegraph.urger King has emphasised that the new offering is meant to be shared.

However, John Schaufelberger, Burger King's vice-president, said it "demonstrates the type of menu offerings our guests can expect."

Survey Reveals Unhealthiest of Fast Foods
A recent survey by Men's Health magazine has revealed that the Top 10 fast-food restaurants in the ....