Older adults are more prone to falls and fall-related injuries. A team of researchers compared the effects of tai chi to a physical therapy called lower extremity training. The researchers suggest that practicing tai chi reduces risk of falling in older adults.

Falls are a leading cause of serious injuries in older adults and can lead to hospitalization, nursing home admission, and even death. Arthritis, heart disease, muscle weakness, vision and balance problems, dementia, and other age-related health problems can increase an older adult's risk for experiencing a fall.


In their study, researchers assigned 368 people 60-years-old and older who had received medical attention for a fall into one of two groups. The first group received hour-long individual tai chi classes conducted by tai chi instructors every week for 24 weeks. Tai chi can be practiced while you're walking, standing, or even seated. Deep breathing, weight shifting, and leg stepping movements are part of the practice. The second group received individual, hour-long LET sessions for 24 weeks conducted by physical therapists. Sessions included stretching, muscle strengthening, and balance training.


‘Older adults who practiced tai chi for a year were about 50% less likely to experience fall-related injuries. ’


The researchers asked participants in both groups to complete at least 80 percent of their sessions, and also to practice either tai chi or LET at home every day during the six- month program and the 12-month follow-up. During the course of the study, all participants kept diaries and recorded any falls they experienced, and they shared their diaries with researchers each month.

Though participants in the study took individualized tai chi classes at home, "I suggest that older adults learn tai chi exercises in a class, and practice at home at least once a day," said Mau-Roung Lin, PhD, Professor and Director of the Institute of Injury Prevention and Control, Taipei Medical University in Taipei, Taiwan, a co-author of the study.

The study is published in the Journal of the American Geriatrics Society.

Tai Chi can Slow Aging Process: Study
Researchers have claimed that Tai Chi was found to be beneficial in increasing the numbers of an important type of cell when three groups of young people were tested to discover the benefits of Tai Chi, brisk walking or no exercise.
READ MORE 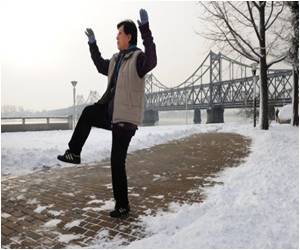