Macrobiotics is an Oriental theory that lays down guidelines for promoting well-being and longevity through systematic diet consisting mainly of whole grains and beans. Macrobiotics is made up of two Greek words, Macro meaning the bigger picture and Bios meaning life. It is basically more a way of life than a specific diet that was followed in Japan.

The macrobiotic diet probably originated with the teachings of a nineteenth century Japanese natural healer, Sagen Ishizuka. It was introduced to the West by George Ohsawa, a teacher in Japan who studied the eating habits of ancestors, followed the dietary principles of Sagen Ishizuka and claimed to have been cured of a life-threatening diseasetuberculosis. 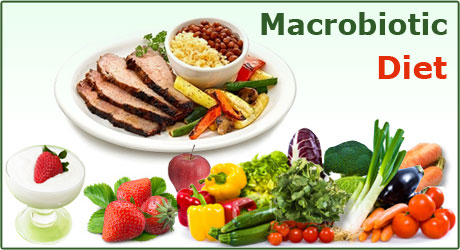 Chinese philosophy describes the Yin and the Yang as the two opposite, but complementary cosmic forces that operate in all areas of life. Macrobiotics extends the principles of the Yin and the Yang to the realm of food and cooking. The main tenets of the macrobiotic diet are Yin and Yang, meaning Expansive and Contractive forces that are inherent in any food we intake. Ohsawa said if we balance the contractive and expansive forces we will stay away from diseases and live a healthy, happy life. Ohsawas original macrobiotic diet was considered too restrictive by many dieticians and the Kushi diet popularized in North America by Michio Kushi in 1978 is seen as a popular alternative to Ohsawas macrobiotic diet.

The nutritional aspect of the macrobiotic diet holds to the principle that the body can exist in harmony with Nature and recover its natural good health. It is important to note here that the diet should be based on foods native to ones' own climate, as this helps in achieving that "natural balance". The diet should constitute of the following components:-

Grains: 50-60% of this diet is to be composed of whole grains. Those recommended are brown rice, millet, barley, oats, rye, corn, wheat and buckwheat. Breads must be made without yeast and pasta is allowed in small amounts.

Vegetables: 20-30% - Recommended vegetables include green cabbage, kale, broccoli, cauliflower, collards, pumpkin, watercress, chinese cabbage, dandelion, mustard greens, scallions, onions, turnips, carrots and winter squash. Cucumbers, lettuce, celery, chives and dill are also permitted on occasion. Potatoes, tomatoes and eggplants are not permitted as they originated in tropical regions and the fact that they are eaten in temperate climates is believed to contribute to the loss of natural immunity.

Fish, fruit, nuts and seeds can be occasionally consumed. Fruits grown locally and native to ones' area have to be consumed.

Beverages included in the macrobiotic plan are spring or well water and any traditional tea that is without fragrance or stimulants. Eliminate drinks like soda, any artificial drink, colored and aromatic teas, coffee, and strong alcohol.

Since the objective is to live in harmony with nature, electrical or microwave cooking is not recommended. These types of cooking cause food to retain less energy and nutrients. Recommended cooking fuels are wood and natural gas.

Research has been done on men with AIDS. One way AIDS can be detected is when lymphocytes (the white cells that fight infection) decline in number. A study has shown that when those affected began the macrobiotic diet soon after their diagnosis, they maintained higher lymphocyte counts. There are even documented reports of incurable cancer completely disappearing in people who follow the diet.

Diseases that can be helped

It is believed, Obesity, Tinnitus, Acidity, Ulcer, Skin diseases, Indigestion, Hair loss are some amongst several other diseases that can be mitigated with a macrobiotic diet. Every disease is some form of imbalance in our body. Some may take a longer time to heal but essentially, if we are strict with our diet and knowledgeable about the food dynamics then we can heal our body of many illnesses. If the disease is because of an overly Yin diet, then including Yang foods will tend to balance and heal the person. Similarly illnesses arising from excessive Yang food items can be controlled by balancing with suitable Yin food items.

HI I AM DR.OF ALTERNATIVE MEDICINE.MACROBIOTIC IS BALANCING YIN ANG YANG .HONY MANGOES AND SPICY NUTS SEEDS ARE YANG BUT IN THE ABOVE LIST ITS WRITTEN IN YIN WHICH NOT CORRECT.PLEASE THESE ALL THING I MENTIONED FULLY USED IN OUR REGION THAT I ASK MY PATIANTS TO USE FOR YANG .

Very true.Note that non vegetarian food is excluded.
Indian Philosophical treatises stress the fact that natural food is to be consumed.
Human Nature is broadly divided into three categories.
Contented,self reliant and calm
Highly energetic,active and passionate .
Inactive,dull and depressed.
These three characteristics are present in every human being and the combination of these factors vary depending on predisposition, and habit.Also these characteristics vary from one moment to another.
The first mentioned is ideal when you become healthy, strong both physically and mentally.You shall be in control of your mind and emotions and you shall be self reliant and self contented.
This can be achieved by diet;for your thinking is determined by what you eat and you become what you think.
For instance if you take pungent, spicy food you become hyperactive , easily swayed by emotions.On the other hand if you take mainly dairy food and vegetables you not only become healthy but you can manage your emotions.
Therefore Diet is given pride of place in Indian Philosophy.
There are foods to avoid.
-Spicy,pungent,stale,food that is too hot or that is too cold;
that is not cleaned,that is not over cooked;non vegetarian food including egg.
Suggested food.
Grains, Vegetables,roots,Milk products
Also it is necessary that the food be prepared by people who love you.In fact Sanskrit texts say 'That food is best that is prepared by self; next that is prepared by one's Mother,Sister,Daughter and Wife in that order.Any thing other than this is equivalent to poison'
mental vibrations do play an important part in preparing the food.

Low Calorie Diet
Low calorie meals or diet include foods that are high on nutritional content and yet have fewer calories. Updated information about low calorie diet or low calorie foods and its health benefits.

Grains
Grains make the foundation of good nutrition. The food guide pyramid shows that you need generous amounts of these foods each day to maintain health and prevent disease. Reasons? Our support group will tell you why!

The Healthy Way of Eating with Sattvic Diet
Sattvic diet is an ancient practice that is followed in Ayurveda. It is the purest form of food available for peace of mind, body and soul.
Sign up for Wellness Consult a Doctor Sign up for Selfcare
Advertisement
Health Topics A - Z
A B C D E F G H I J K L M N O P Q R S T U V W X Y Z

The Essence of Yoga Post-Nasal Drip Selfie Addiction Calculator Color Blindness Calculator Diaphragmatic Hernia A-Z Drug Brands in India Noscaphene (Noscapine) Blood Pressure Calculator Daily Calorie Requirements Sanatogen
This site uses cookies to deliver our services.By using our site, you acknowledge that you have read and understand our Cookie Policy, Privacy Policy, and our Terms of Use  Ok, Got it. Close