What is Ambiguous Genitalia?

Ambiguous genitalia, also referred to as atypical genitalia, is a birth defect where the genitals are not properly developed so as to differentiate the child as a male or a female.

It is a consequence of a group of disorders referred to as disorders of sex development. Ambiguous genitalia are not uncommon, and occur in 1 out of every 4000 newborns. 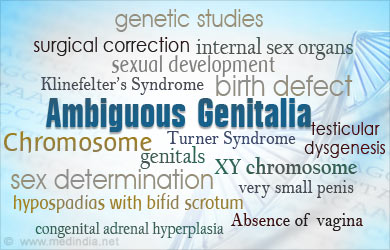 There are three factors that are important in the sex determination of a child:

The formation of the external genitalia begins after the fetus is seven weeks old. Males develop the penis and scrotum, while female genitalia include the clitoris, labia majora, labia minora and the lower part of the vagina. The testis in males usually descend into the scrotum around the time just before the birth of the baby.

Disorders of sexual development (DSD) are classified as:

Sex chromosomal disorders: These include:

Disorders of testicular development or disorders in androgen synthesis/action:

Patients with these disorders often have incomplete masculine genital features or appear like a female, although they have the Y chromosome.

Disorders of testicular development occur due to a failure of the testes to develop properly. These include:

Disorders of androgen synthesis, i.e. synthesis of the male hormones testosterone and dihydrotestosterone, often due to abnormalities in enzymes involved in the production of these hormones in the body. Lack of androgens results in improper development of male genitals, thereby resulting in ambiguous genitalia.

In cases of partial or complete androgen insensitivity syndrome, the androgens may be present but the fetal tissues may not respond to them, and therefore, the development of male genitals may not take place.

Patients with these disorders have the female sex chromosomes (XX), but show features of male external genitals. Some of the conditions that can produce excess androgen production in the fetus are: 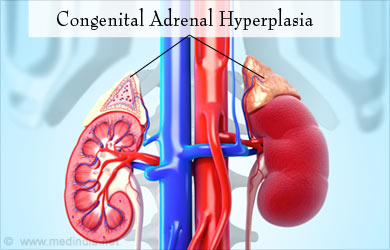 In addition, excess androgens present in the mothers body due to an intake of certain medications or tumor producing androgens can also result in the development of male-type genitals in a female child.

What are the Symptoms of Ambiguous Genitalia?

Ambiguous genitalia with female appearance include:

How to Diagnose Ambiguous Genitalia?

Approaches to the diagnosis of ambiguous genitalia, its cause and the sex determination of the child include: 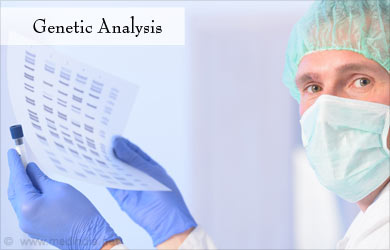 How do you Treat Ambiguous Genitalia?

Approach to the treatment of ambiguous genitalia has to be cautious since the condition not only has medical implications, but also affects the reproductive as well as psychosocial aspects of the affected individual. Counseling of parents is extremely important so that they can an take appropriate decision regarding the treatment of their child.

Surgical correction of the genitals is carried out based on the sex assigned to the patient. The surgery should be done at the time considered appropriate for each condition. It must be remembered that the way a person feels about his/her sex is also dependent on the development of the brain, both within the uterus as well as after birth. Therefore, sex assignment may not be completely straightforward in all cases. 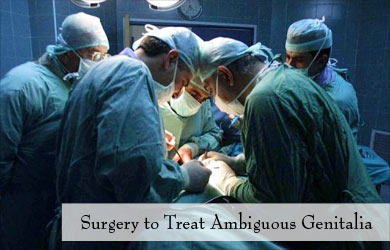 People with ambiguous genitalia also often have other organ abnormalities like defect in the heart, kidney, etc. Therefore, it is necessary to have a complete checkup to diagnose these conditions, which should be treated as necessary. Patients with congenital adrenal hyperplasia may require urgent treatment.

Underdeveloped testis and ovaries may have to be surgically removed to prevent the development of cancer.

XY Females - Women or Men All hell broke loose for Semenya, the South African athlete when laboratory tests proved that she was more a male than a female.

Hypospadias Hypospadias is a congenital defect in which the opening of the urethra is located on the under surface of penis, instead of at the end. Symptoms of hypospadias depend on the severity of the condition.