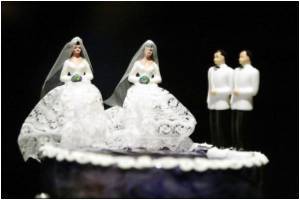 In New York when an appeals court declared marriage as a union between a man and a woman as unconstitutional, the US law took another judicial hit.

Supporters of same-sex marriage hailed the Second US Circuit Court of Appeals' ruling on the controversial Defense of Marriage Act, or DOMA, which mirrored an earlier judgement from another federal appeals court in Boston.

"Section Three of DOMA violates equal protection and is therefore unconstitutional," said the court, citing the part that says 'marriage' means only a legal union between one man and one woman as husband and wife."


Enacted in 1996, DOMA effectively prohibits married same-sex couples from enjoying the same federal benefits and programs as their heterosexual counterparts.
Advertisement
The Supreme Court is expected to consider next month whether to hear a challenge to its legality.

The New York case was initiated by Edith Windsor, who sued the US government in 2010 after it told her to pay more than $350,000 in estate taxes following the death of her longtime partner Thea Spyer, whom she married in Canada in 2007.

A married straight couple would have faced no estate tax.

"Yet again, a federal court has found that it is completely unfair to treat married same-sex couples as though they're legal strangers," said James Esseks of the American Civil Liberties Union's LGBT program in a statement.

"This ruling is an important step in ensuring the rights of men and women are not dependent upon who they love and who they chose to spend their lives with," added New York Mayor Michael Bloomberg.

Eight of the 50 states, as well as the District of Columbia, have recognized same-sex marriage, which is vigorously opposed by evangelicals and the Roman Catholic church. New York is the most populous of those states.

In a report Thursday, the Human Rights Campaign, an LGBT civil rights group, said Catholic organizations have spent at least $1.1 million dollars in four states -- Maine, Maryland, Minnesota and Washington -- where marriage equality is being put to voters on November 6 in tandem with the presidential election.