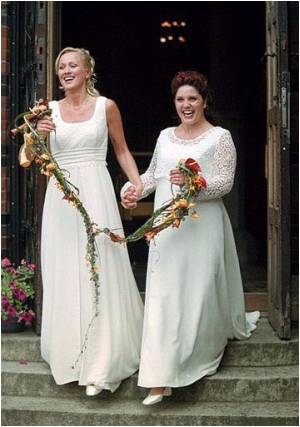 Tatest sign that obstacles to same-sex unions are quietly coming down in Asia is a Buddhist clerics decision to wed two women in Taiwan. This event shows how religion is posing less of a hindrance than in the West.

Fish Huang and her partner You Ya-ting, both 30, received their blessings from Shih Chao-hui, a female Buddhist master, at a monastery in north Taiwan's Taoyuan county over the weekend -- and no one seemed to raise an eyebrow.

Internet search giant Google has launched an international campaign to legalise same-sex marriage, according to a report.

"I think this is their human right. They can choose freely to get married and we should respect them," said Chih Chun, a Buddhist nun who attended the ceremony.


"It makes no difference if couples are heterosexual or homosexual, as long as they are in love and they are happy."

The wedding -- a first for Taiwanese Buddhism -- comes as evidence is mounting that Asians and their governments are quietly revising their views on same-sex marriage even as the subject remains a highly charged issue in the United States this election year.

Today two bills calling for the legalization of gay marriage were introduced to Australia's parliament.

Communist Vietnam is considering making the practice legal and in Nepal hundreds marched in support of enshrining it in the new constitution. Tokyo Disneyland has allowed gay couples to informally tie the knot on its grounds.

According to Shih, the cleric who presided over the ceremony in Taiwan, this is a trend facilitated regionwide by a lack of religious and philosophical dogma against homosexuality.

"Buddhism does not dismiss homosexuality from an ideological point of view, and in Confucianism it's a grey area, so eastern societies tend to be more open-minded towards homosexuality," she said.

Even so, the move towards greater tolerance does not apply universally to Asia, as countries where Islam is the dominant religion maintain tough laws against homosexuals.

In Malaysia, for example, they can be sentenced to up to 20 years in jail, while in Indonesia they risk caning of up to 100 lashes.

And even in Asia's most culturally liberal societies, homosexuals are unlikely to see full equality before the law anytime soon.

Taiwan is a case in point -- despite happenings such as this weekend's wedding and hosting Asia's biggest gay pride parade.

While it is nine years since the island's cabinet drafted a bill to legalise same-sex marriage, President Ma Ying-jeou has said public consensus is needed before the government can move ahead with the law.

But the key point in non-Muslim Asian societies, according to observers, is that opposition is less grounded in organised religion, and more in ingrained family values.

"It's not about religious belief," said Vietnamese sociologist Le Quang Binh, director of the Institute for Studies of Society, Economy and Environment in Hanoi.

Religions, and especially Buddhism, cover such a broad spectrum of views on gay rights that it is neither a factor for or against liberalisation.

What Buddhism does facilitate is a debate among its adherents of the issue without dismissing it out of hand on orthodox grounds.

"In general, Buddhist leaders are socially conservative, but Buddhist lay people can be very different from them," said Andre Laliberte, a social scientist at the University of Ottawa who has written a book on Buddhism in Taiwan.

Shih, the Buddhist master who wed the Taiwanese couple, "is not representative at all of the leadership of Buddhists in Taiwan, but many younger, more educated lay Buddhists recognise themselves in her", he said.

While the Old Testament apparently condemns homosexuality, there are no similar passages in the Buddhist classics.

The lack of any absolute authority commanding the loyalty of all Buddhists is key, according to Hillary Crane, an anthropologist specialising in Taiwanese Buddhism at Oregon's Linfield College.

"Also in Catholicism you?re supposed to defer to the Vatican and what they say, and there is no such central authority in Buddhism."

Scotland will soon allow same-sex couples to marry by bringing forward legislation, making it the first part of the UK to do so, the government announced on Wednesday.
<< Over 150 Million Tweets Inspired By London 2012 Olympics
Defenses Rise Against Asian Mosquito Peril In Europe >>