From a double-blind study, Italian researchers have found that brain cortex gets excited, when exposed to electromagnetic fields from cell phones.

An article published in the journal, Annals of Neurology revealed the effects of electromagnetic field from cell phones on the human brain functioning, having implications for patients with epilepsy, or other neurological conditions.


More than 500 million people in the world use cell phones which emit electromagnetic fields (EMFs). Though many studies have looked at the effects of EMFs on the body, few have focused on their effects on the brain. Such effects could be harmful, neutral, or beneficial and might be particularly important for individuals with conditions involving cortical excitability, such as epilepsy.


Researchers in Italy, led by Paolo M. Rossini, M.D., Ph.D. of Fatebenefratelli, used Transcranial Magnetic Stimulation (TMS) to investigate brain function under exposure to electromagnetic fields from a common type of cell phone. Their study reports the effects of EMF exposure on brain physiology for the first time.

The researchers developed a double-blind study in which 15 young male volunteers were exposed to EMF signals from a GSM 900 cell phone for 45 minutes. They measured Motor Evoked Potentials (MEPs) during motor cortex TMS before, and immediately after EMF exposure, and also one hour later.

In 12 of the 15 subjects, the data showed an excitability change in the motor cortex adjacent to the cell phone. 'Intracortical excitability was significantly modified, short intracortical inhibition was reduced and facilitation enhanced,' the authors report. They found that the effects of the EMF were transient and the subjects' brains tended to return toward baseline conditions one hour after the exposure.

It would be premature to presume that this work implies that using a cell phone is bad for the brain in any way. Much more work needs to be done to understand whether these electrical changes in the brain make any difference whatsoever in the way we think or in any disease process in which cortical excitability is affected.

'It should be argued that long-lasting and repeated exposure to EMFs linked with intense use of cellular phones in daily life might be harmful or beneficial in brain-diseased subjects,' they conclude. 'Further studies are needed to better circumstantiate these conditions and to provide safe rules for the use of this increasingly more widespread device.' 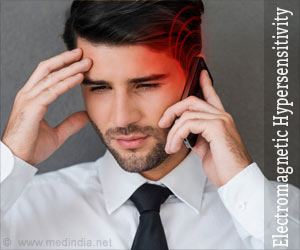