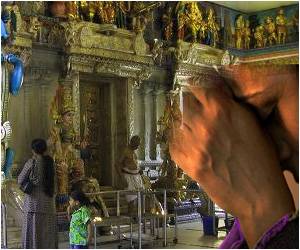 The total number of Christians worldwide is 2.18 billion, or 31.7 percent of the estimated global population of 6.9 billion, a new study has said.

"Christians are also geographically widespread -- so far-flung, in fact, that no single continent or region can indisputably claim to be the center of global Christianity," the Pew Research Center said.

A new research has suggested that keeping faith could open your mind, but it can also cause your brain to shrink at a different rate.
Advertisement

Christians make up as big a proportion of the world's population as they did a century ago, but whereas two-thirds of them in 1910 were in Europe, they now are spread more widely throughout the world.


Nearly 34 percent can be found in North and South America, and 26 percent in Europe, while 23.6 percent live in sub-Saharan Africa and 13.1 percent in Asia-Pacific. Just 0.6 percent are in the Middle East and North Africa.

Religion Linked to a Willingness to Punish

A new study examined the link between support for a religion and a willingness to inflict punishment.
Advertisement
"Christianity today -- unlike a century ago -- is truly a global faith," said the Pew Research Center in the executive summary of its report, "Global Christianity," produced by its Pew Forum on Religion and Public Life unit.

Half of all Christians are Catholics, while 36.7 percent are Protestant and 11.9 percent Orthodox, according to the study.

The United States, Brazil and Mexico led the list of nations with the largest number of Christians, with Russia, the Philippines and Nigeria having the biggest numbers in Europe, Asia-Pacific and Africa respectively.

Pew Research Center said it based its findings, posted on its website (www.pewforum.org), primarily on a country-by-country analysis of about 2,400 data sources, including censuses and population surveys.

Paediatric oncologists are likely to accept religion as a resort when medicine has failed the patient, according to a new study.
Advertisement
<< Hay Fever Worse in Spring Than Summer, Says Research
Report Shows How to Stay Fit Without Hitting the Gym >>

A-Z Drug Brands in India Find a Doctor Noscaphene (Noscapine) Blood - Sugar Chart Loram (2 mg) (Lorazepam) Diaphragmatic Hernia Post-Nasal Drip Sinopril (2mg) (Lacidipine) Accident and Trauma Care Hearing Loss Calculator
This site uses cookies to deliver our services. By using our site, you acknowledge that you have read and understand our Cookie Policy, Privacy Policy, and our Terms of Use