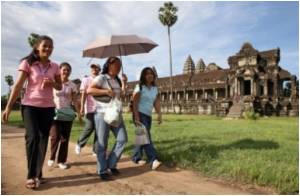 The UN World Tourism Organisation said that Chinese travellers are the world's biggest tourism spenders, splashing out a record $102 billion (78 billion euros) on trips abroad in 2012.

The number of Chinese travellers to foreign countries jumped from 10 million in 2000 to 83 million in 2012, the Madrid-based body said in a statement, attributing the spike to China's rising disposable incomes and an easing of travel restrictions.

"Expenditure by Chinese tourists abroad has also increased almost eightfold since 2000. Boosted by an appreciating Chinese currency, Chinese travellers spent a record $102 billion in international tourism in 2012, a 40 percent jump from 2011 when it amounted to $73 billion," the UNWTO said.


China has now become "the largest spender in international tourism", it added, noting that since 2005 the country had overtaken Germany, the United States, Italy, Japan, France and the United Kingdom in travel expenditure.
Advertisement
After China, travellers from Germany and the United States splurged the most on foreign trips, spending around $84 billion each in 2012.

Among other emerging countries, Russians and Brazilians are continuing to travel and spend more.

Russia jumped from seventh to fifth place with a 32-percent increase in spending to $43 billion, while Brazil moved from the 29th place in 2005 to the 12th with an expenditure of $22 billion last year.

"The impressive growth of tourism expenditure from China and Russia reflects the entry into the tourism market of a growing middle class from these countries, which will surely continue to change the map of world tourism," said UNWTO Secretary-General Taleb Rifai.

International tourist arrivals exceeded one billion for the first time last year despite global economic uncertainty and numbers will rise further in 2013, the UNWTO said in January.

Chinese 'Maternity Tourism' Targeted By California
While six pregnant Asian-looking women cross the road, two others cross in the opposite direction. ....

From Syria War Tourism, Bored Japanese Gets Kick
Toshifumi Fujimoto, a Japanese trucker is bored with his humdrum job, a daily run from Osaka to ......

Tourism Chiefs' Pleas to Use Potter Link Rejected by JK Rowling
It has always been clear that the place where JK Rowling grew up cast a lifelong spell on the Harry ...