Think Twice Before Buying a Diamond Ring on Valentine's Day 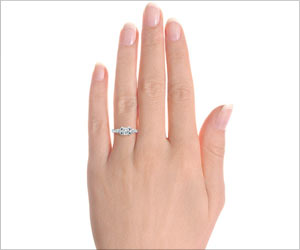 Diamond may be of eternal value, but its valuation actually gets affected by the stories people attach to it, shows a new research conducted at University of Toronto.

Diamond rings disclosed to be associated with divorce and other failed relationships are sold at lower prices than rings without a negative history, the study into the re-sale of diamond engagement rings has revealed.

Advertisement
‘Diamond solitaire engagement rings with no disclosed negative history were most likely to sell and at a higher price.’

That suggests previous academic research that claimed a single, clearly-defined market category is associated with a product's success, is not the whole story, said the study's researcher Anne Bowers, associate professor at Rotman School of Management University of Toronto in Canada.


The assumption there is that consumer expectations are fully met when an item cleanly fits into a category. "In some sense, these findings are the exact opposite," Bowers noted. "Here's a product that technically speaking, fits exactly the criteria for an engagement ring, and yet you still have problems," Bowers said. Two parts to the study revealed similar findings.
Advertisement
Analysis of data from 1.5 million eBay listings of diamond solitaire engagement rings over a 13-month period showed rings with no disclosed negative history were most likely to sell and at a higher price. Rings where sellers disclosed a divorce or other failed relationship -- marked by comments such as "not going to happen," or "right ring wrong guy" -- were less successful.

A separate attitudinal survey showed that even though participants believed a diamond ring from a divorce was most likely to be authentic -- compared to the same one from a happy marriage or a jewellery store -- it was the opposite when it came to how much they' would be willing to pay for it. The study was published in the journal Advances in Strategic Management.

Diamonds may Hold the Key to Future NMR/MRI Technologies: US
Researchers recorded the bulk room-temperature NMR hyperpolarization of carbon-13 nuclei in diamond ...

Diamonds can be Used to Identify Cancerous Tumors at an Early Stage
By attaching hyperpolarized diamonds to molecules targeting cancers the technique can allow ......

Diamonds: Computer's Best Friends?
An information can flow through a diamond wire in a much efficient way and could make computers ......