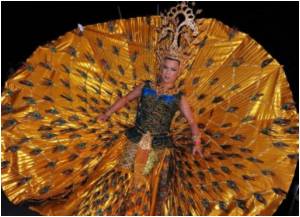 Sequinned bishops danced alongside self-proclaimed "Dykes on Bikes" in the 31st Mardi Gras which displayed its usual mixture of hedonism and gay rights activism.

Organisers estimate that 300,000 people turned out to watch the largest gay pride march in the Asia Pacific wind its way through the city's Oxford Street gay district.

Around 10,000 marchers took part in the parade, which started in 1978 as a demonstration against police brutality against homosexuals and has transformed itself into a celebration that attracts spectators from around the world.

Hollywood comedienne Joan Rivers received an enthusiastic welcome from the crowd, with other participants on the parade's 135 floats ranging from macho men in leather and studs to flamboyant feather- and sequin-clad drag queens.

Alongside the glamour, organisers retained a strong element of the parade's original political flavour, with the theme of this year's festival -- "Nations United" -- designed to draw attention to gay rights.

Among the floats was a tribute to Milk, the gay US politician whose career and 1978 assassination were made into a successful movie for which Sean Penn won a best actor Oscar this year.

Australia's Mitcham, a diver and the only openly gay winner at the Beijing Games last year, led the parade wearing his gold medal, surrounded by dancers in swimming trunks waving scorecards.

Mitcham said the event had an important message.

"Mardi Gras is the biggest celebration of homosexuality in the world, and aims to promote not just the tolerance but the acceptance of the gay community in the wider community," he said.

A contingent of uniformed police marched in the parade, as did a group of volunteer firefighters from Victoria state who until last week were battling the country's most deadly wildfires.

Police praised the Oxfrod Street crowd's behaviour, but said there were a series of incidents that resulted in 28 arrests for offences such as assault, offensive behaviour, robbery and resisting arrest.

Homoesexuality (or) Same Sex Love is the hottest most discussed human trait. There has been a hunt for a Gaye gene in order to lend credibility to a growing cause.

Participants in the gay and lesbian Mardi Gras over the weekend in Australia could be missing something of the usual kick. For the police have announced a major seizure of ecstasy tablets.

Hundreds of thousands of gays, lesbians and their supporters from Europe marched in Madrid Saturday under sunny skies in a colourful parade, as London and Paris also held their annual