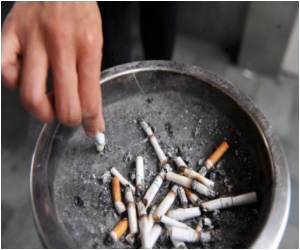 Quitting smoking suddenly could be an early symptom of lung cancer for longtime smokers, scientists have suggested.

"It is widely known that many lung cancer patients have stopped smoking before diagnosis. This observation is often dismissed, by saying that these patients must have quit because of symptoms of their cancer," said Barbara Campling of the Thomas Jefferson University in Philadelphia.

"However, we found that the majority of lung cancer patients who stopped smoking before diagnosis quit before the onset of symptoms. Furthermore, they often quit with no difficulty, despite multiple previous unsuccessful quit attempts. This has led us to speculate that, in some cases, spontaneous smoking cessation may be an early symptom of lung cancer," said Campling.


Researchers interviewed 115 lung cancer patients from the Philadelphia Veterans Affairs Medical Center, all of whom had been smokers. Fifty-five (48pc) had quit smoking before diagnosis, and only six of those (11pc) had experienced symptoms of lung cancer by the time they quit.

Tobacco use in women is on the rise. The health risks of tobacco are far too many has never done a woman any good psychologically or health-wise.
Advertisement
Patients with lung cancer who quit were as dependent on nicotine, when their smoking was at its highest point, as those who continued to smoke. Yet 31pc reported quitting with no difficulty.

Researchers speculated that spontaneous smoking cessation might be a presenting symptom of lung cancer, possibly caused by tumor secretion of a substance interfering with nicotine addiction.

"There is a danger that this study could be misinterpreted as suggesting that heavy smokers should continue smoking. We emphasize that all smokers must be strongly encouraged to stop," said Campling.

The study has been published in the Journal of Thoracic Oncology, the official monthly journal of the International Association for the Study of Lung Cancer (IASLC).