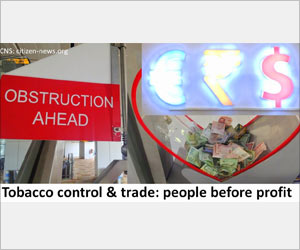 India, Pakistan and Nepal have planned to implement stricter tobacco control regulation. The delegates of the World Conference on Tobacco or Health (WCTOH) have urged these countries to stand firm against the tobacco industry pressure. They also affirmed their support to all countries that have passed or are considering adopting plain packaging or graphic health warnings covering more than 85% including India, Pakistan and Nepal in a declaration.

Another suggestion by the WCTOH was that, substantial and regular increases in tobacco excise taxes would raise price and make tobacco less affordable. The price inflation can effectively reduce tobacco consumption and improve public health, as well as generate additional revenue that can be spent on healthcare.


In spite of the immense pressure from the tobacco industry, Nepal ministry of health and population passed a comprehensive regulation, which includes introduction of large graphic health warnings, bans on tobacco advertising and sponsorship, and a smoke-free law.

Tobacco use in women is on the rise. The health risks of tobacco are far too many has never done a woman any good psychologically or health-wise.
Advertisement
Nearly 37% of people in Nepal consume some tobacco in some form. Tobacco industries have filed 16 cases against the implementation of the law and currently two are pending after winning 14 cases. "I hope India will do, what we have done," Adhikari said, adding there were several obstacles but he did not 'compromise'.

Nepal won the Bloomberg Philanthropies Award for its effort to control tobacco use through 'warning about the dangers of tobacco with pack labels and mass media'.