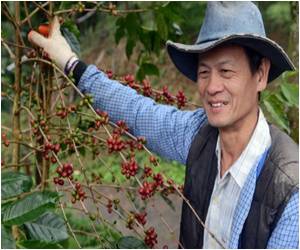 Botanists have previously shown that Axinaea flowers appear in clusters of a few to more than 20 flowers, with pink, red, yellow, or orange petals that usually do not open completely.

The stamens of those flowers stand out based on their contrasting colors and conspicuous, bulbous appendages. Something else about the stamens also piqued the researchers' curiosity: one or more of these stamens was almost always found missing in the flowers the researchers observed in the field or on herbarium specimens.

The researchers learned what had happened to those stamensand just how remarkably unusual Axinaea flowers actually arethrough a combination of pollination experiments, video monitoring, and detailed analyses of stamen structure and composition. They have observed multiple bird species, mostly tanagers, enjoying Axinaea food bodies and acting as pollinators in the process.


The findings may hold general lessons about the evolution of plants and their pollinators, the researchers say, noting that the vast majority of Axinaea's close relatives depend on bees for pollination.
Advertisement
"Only about 100 of the 5,000 or so species in the family Melastomataceae are known to produce nectar and to be pollinated by other insects or vertebrates," says Jürg Schönenberger, senior author of the study, also at the University of Vienna. "In the evolution of these species, including Axinaea, pollinator shifts in combination with changes in the floral morphology must have occurred."

Health Benefits of Hibiscus
Find out the interesting facts of Hibiscus and how it can be used in tea and juices to boost your in...