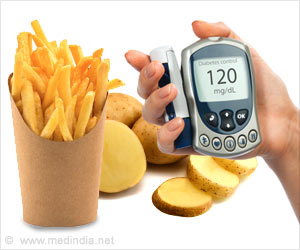 Women who eat lots of potatoes -- especially chips or crisps -- before pregnancy are at higher risk of gestational diabetes, says a new study.

Gestational diabetes can have long-term health consequences for both mother and child, including a higher chance of heart disease and other forms of diabetes.

The condition is not caused by a lack of insulin, but by the action of hormones produced during pregnancy that blocks the action of insulin.
Advertisement
‘Substituting two servings of potatoes a week with other vegetables or whole grain foods reduces the risk of gestational diabetes by 10%.’


But compared to other vegetables and carbohydrates, they also contain extra starch, which is associated with a more rapid increase in blood sugar levels.

A new study indicates that levels of a biomarker in a pregnant woman's blood can help physicians gauge her risk of developing gestational diabetes during the first trimester.
Advertisement
Diabetes occurs when the body is no longer able to make enough insulin, a hormone that prompts cells in the body to absorb sugar from the blood for energy and storage.

Up to now, the possible association between gestational diabetes and eating spuds had not been investigated.

To see if there was a link, researchers led by Cuilin Zhang at the National Institutes of Health in Rockville, Maryland used data from the Nurses' Health Study II, which has monitored more than 115,000 women since 1989.

Zhang and colleagues looked at the records for 15,632 women with no history of gestational diabetes or chronic disease who became pregnant between 1991 and 2001.

Of 21,693 single-fetus pregnancies, 854 -- some four percent -- developed gestational diabetes, according to the study published in the British Medical Journal.

The women were asked to report their potato consumption during the year previous to becoming pregnant, rating intake from "never or less than once a month" to "six portions per day".

This data was matched against medical records which showed whether they had developed gestational diabetes.

After taking other factors such as age and family history of diabetes into account, the study found a strong link with potatoes, especially fried and baked.

Doctors recommend changes in diet and exercise with the onset of gestational diabetes but in severe cases insulin treatment may be required.

The solution? Eat other vegetables and legumes -- a family including beans, peas and lentils -- instead of starchy spuds, the authors recommend.

Substituting two servings of potatoes a week with other vegetables or whole grain foods yielded an approximately 10 percent reduction in risk, they reported.

Despite the statistical evidence, the researchers say that a direct cause-and-effect link between eating potatoes and gestational diabetes "cannot be assumed."

But they noted that earlier studies have suggested that spuds can have a detrimental effect on blood sugar levels due to their high starch content.

The doctors saw more fluid than usual in my placenta, which can mean I have diabetes, Kim told her concerned family after a routine ultrasound.
Advertisement
<< Beware! Beedi Smoking Turns Out to be a Potential Risk Facto...
Mexican Immigrant Children's Diet Less Nutritious Than Their... >>

A cell-signaling pathway that plays a key role in increasing insulin secretion during pregnancy has been identified by scientists.

Find a Doctor How to Reduce School Bag Weight - Simple Tips A-Z Drug Brands in India Blood Donation - Recipients The Essence of Yoga Iron Intake Calculator Pregnancy Confirmation Calculator Blood - Sugar Chart Selfie Addiction Calculator Vent Forte (Theophylline)
This site uses cookies to deliver our services.By using our site, you acknowledge that you have read and understand our Cookie Policy, Privacy Policy, and our Terms of Use  Ok, Got it. Close
×