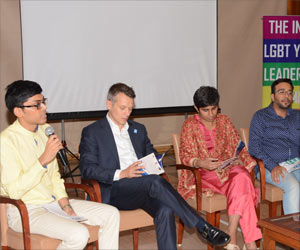 Parents of LGBT children came together in Mumbai to talk about acceptance of their gay and lesbian children and how important family bonds are for love, empowerment and dignity.

Padma Iyer, mother of equal rights activist Harish Iyer said, We should remember that the best relationship that we can share with our kids is the relationship of friendship. We need to be a friend to our children while also being a parent, and the most trusted one.

The PRIDE Study will cover many health issues among the LGBT community such as diabetes, breast cancer, asthma, cardiovascular disease and Parkinson's disease.
Advertisement
‘Parents have always played an important part globally in the LGBT rights movement.’

Aruna Desai, another parent who went through her own journey to accept her gay son Abhishek said, Keep in mind that your child does not intend to hurt you. Your child might even be afraid of hurting you, and this is why he is so afraid to come out to you. If your son has confronted that fear enough to come out to you, try to feel more love for him for coming out than hurt about him being gay.


Agreeing with Patankars sentiments, Pradeep Divgikar, father of actor, singer and former Mr.Gay India Sushant Divgikar said, "I understand all parents may not immediately accept the sexuality of their LGBT child for fear of being socially ostracized and inviting the wrath of ignorant relatives. But there is nothing to feel guilty about it. If anything, we as parents should celebrate and embrace the child's diversity and provide unstinted support."

Sridhar Rangayan's acclaimed film 'Breaking Free' - the first Indian LGBT documentary selected by the government will be screened at National Law India University.
Advertisement
Parents have always played an important part globally in the LGBT rights movement. In USA, many cities have parent support groups called PFLAG (Parents, Families and Friends of Lesbians and Gays). In India, several parents have been petitioners supporting the repeal of Sec 377 in the Supreme Court. Sec 377 criminalizes same-sex relationships and is a huge deterrent in gay & lesbian persons coming out and being accepted.

Reiterating the parents views and stressing that acceptance is the key, Harish Iyer said, "Family is the place that one should be able to enjoy the truest form of freedom. When you don't have the support of your folks, your real self becomes a prisoner of the mask you wear" said equal rights activist Harish Iyer.

Moderating the discussion, gay rights activist Pallav Patankar said, "In my last 25 years of experience, I have seen the huge positive transformation one observes with LGBT individuals who have been accepted by their parents. Coming out to ones parents can be the most anxious moment in a queer person's life, and can be the defining factor in one's empowerment and personal growth."

The parents at the press conference also launched the film. Evening Shadows (Surmaee Shaam), a sensitive heart-warming feature film about a gay son coming out to his mother, to be directed by award winning filmmaker and activist Sridhar Rangayan and produced by Solaris Pictures.

Talking about the film, Divgikar added, "I am sure through this very delicate and fascinating story line and expert handling by all involved in this project, the film will empower both parents and LGBTQ children to accept and celebrate sexual diversity."

Evening Shadows (Surmaee Shaam) film is already making news in India and globally. Listed as one of the 5 independent films in the world to support, by US based MovieMaker Magazine, this Hindi feature film marks Rangayans return to dramatic fiction after his acclaimed documentaries Purple Skies and Breaking Free, which this year won the National Award for Best Editing (non-fiction).

"Evening Shadows (Surmaee Shaam) is a beautiful story of a mother-son bond that is tested by ravages of time, space and hidden truths", said Rangayan. When a son or daughter comes out of the closet he/she pushes the mother into the closet as she is not able to share the secret with anyone. In conservative families, especially in smaller towns, it is a huge challenge for parents to accept their gay & lesbian children.

Set in a small town in India, Evening Shadows (Surmaee Shaam) is not only the journey of young gay photojournalist Kartik coming out to his conservative family, but also the journey of his traditional mother Vasudha to come to terms with her sons life, and through the process also be empowered as a woman within a patriarchal society.

Evening Shadows (Surmaee Shaam) which is expected to be shot in South India end of November, stars acclaimed actor Mona Ambegaonkar in the lead role as the mother. Speaking at the press conference, Ambegaonkar said, "This is a very challenging role for me. My character Vasudha is a very caring mother and loves her son dearly, but is devastated to know her son is gay. It is an emotional journey for her to grapple with this truth. The role excites me as it offers myriad shades of emotions, which is any actors dream."

Unequal online availability of educational materials regarding assisted reproductive technology (ART) tailored for LGBT patients has been reported by researchers.