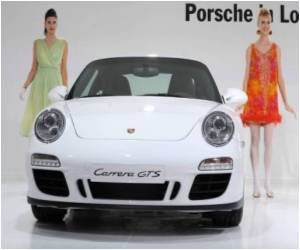 A University of Illinois researcher has linked the spike in automobile usage with increased levels of obesity.

Sheldon H. Jacobson, a professor of computer science and the director of the simulation and optimization laboratory at Illinois, said that the surge in passenger vehicle usage in the U.S. between the 1950s and today may be associated with surging levels of obesity.

"You can think of obesity as an energy imbalance," said Jacobson.


"People consume food, which is a form of energy, and then they expend it in their activities. But if you look over the last 60-plus years, the automobile has become our primary mode of transportation - so much so, in fact, we have literally designed our way of life around it. It is that energy imbalance that ultimately may lead to obesity," added Jacobson.

Childhood obesity is one of the most serious health challenges in the developing countries and needs to be understood and tackled effectively.
Advertisement
To analyze the relationship between obesity and vehicle use, Jacobson and students Douglas M. King and Rong Yuan looked at annual vehicle miles travelled per licensed driver as a surrogate measure for a person's total sedentary time.

After analyzing data from national statistics measured between 1985 and 2007, Jacobson discovered vehicle use correlated "in the 99-percent range" with national annual obesity rates.

"If we drive more, we become heavier as a nation, and the cumulative lack of activity may eventually lead to, at the aggregate level, obesity," he said.

Jacobson chose annual vehicle miles travelled as a proxy for a person's sedentary time because inactivity is most obvious when you are sitting in a car.

"When you are sitting in a car, you are doing nothing, so your body is burning the least amount of energy possible," he said.

"And if you are eating food in your car, it becomes even worse," he added.

The results of Jacobson's research were published in the journal Transport Policy.

Obesity is the root cause of problems like diabetes, heart disease, stroke, arthritis and gall bladder disease. A serious look at our strategies is needed to tackle this fast growing epidemic.
Advertisement
<< Migraine Frequency May Reduce With Botox Jabs
A Working Memory To Keep Your Wits Around You When Stressed >>