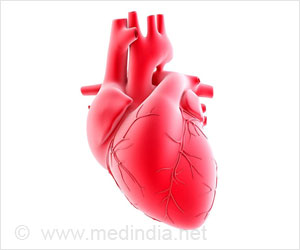 A new role has been identified for macrophages. Macrophages are white blood cells that help in preventing infections by fighting pathogen, they remove cellular debris and other unwanted materials. The study team discovered that macrophages play an essential role in maintaining healthy heart function by helping in conduction of electric signals that coordinate the heartbeat. The study from the Massachusetts General Hospital (MGH) is published in Cell.

"Our finding that a new cell type is involved in cardiac conduction may lead to better understanding of normal heart function. What really surprised me was that macrophages can depolarize -- change their electric charge -- when coupled to a myocyte. Down the line, this work on the role of macrophages in conduction may lead to new treatments for cardiac arrhythmias," says corresponding author Matthias Nahrendorf, MD, PhD, of the MGH Center for Systems Biology.

Macrophages play a key role in clearing the body of harmful substances and microbes, such as toxins and bacteria, as well as clearing away dead tissue.
Advertisement
‘The role of macrophages in normal cardiac conduction in maintaining healthy heart rhythm, yields new insights and recommends novel therapeutic strategies that focus on modulating macrophages.’

Best known for their immune system activity of engulfing and digesting microbes, damaged cells and foreign substances, macrophages are found in tissues throughout the body and have recently been shown to have additional functions related to the tissues where they reside. While macrophages are required for healing damaged tissues in the heart, their presence within healthy heart muscle suggests a role in normal heart function. Nahrendorf's study was designed to investigate their potential role in transmitting and coordinating the electrical signals that stimulate heart muscle contraction.


Initial experiments in mice revealed that cardiac macrophages are more abundant in the atrioventicular (AV) node -- a key structure connecting the atria (upper chambers) to the ventricles (lower chambers) -- which coordinates contraction timing for the upper and lower chambers. Similarly high concentrations of macrophages were found in AV nodes from human autopsy samples. Subsequent animal experiments found that macrophages connect to heart muscle cells via gap junctions -- pore-like structures known to coordinate heart muscle contractions -- and that the shifts in electric charge that carry the conduction signal are synchronized between macrophages and adjacent heart muscle cells called myocytes.

Persisting virus in macrophages can cause reactivation of HIV infection even after its eradication from T-cells following anti-retroviral therapy (ART).
Advertisement
Mice lacking a key gap junction protein showed an abnormal slowing of signal conduction through the AV node, and a complete depletion of tissue macrophages led to the development of AV block -- a delay in conduction between the atria and ventricles that, in human patients, requires pacemaker implantation. Overall, the findings suggest that cardiac macrophages are essential participants in the cardiac conduction system and that changes in their numbers or properties may contribute to heart rhythm abnormalities.

Nahrendorf and his colleagues are continuing to explore the role of macrophages in both the healthy heart and in common disorders of signal conduction. He adds that the cells' natural propensity to surround and take up materials for disposal could be used to induce macrophages to ingest drugs carried on nanoparticles.

How the Human Immunodeficiency Virus can Infect Macrophages

How HIV is able to infect macrophages despite the presence of a protective protein has been identified by researchers.
Advertisement
<< Mindfulness Meditation Benefits Women More Than Men
Mechanism Behind Age-related Disease Unveiled Using Milk Pro... >>

Short episodes of irregular heart rhythm, which lasts for less than 20 seconds does not increase risk of stroke in people with pacemakers.

Drug Side Effects Calculator Calculate Ideal Weight for Infants Color Blindness Calculator Loram (2 mg) (Lorazepam) Find a Doctor Noscaphene (Noscapine) Sinopril (2mg) (Lacidipine) Sanatogen How to Reduce School Bag Weight - Simple Tips Pregnancy Confirmation Calculator
This site uses cookies to deliver our services. By using our site, you acknowledge that you have read and understand our Cookie Policy, Privacy Policy, and our Terms of Use