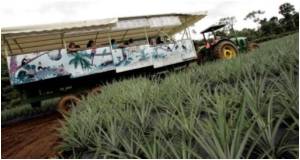 There is a possibility that carbon emission problem of the world might be solved by a potentially game-changing breakthrough in artificial photosynthesis, suggests a new research.

A potentially game-changing breakthrough in artificial photosynthesis has been achieved with the development of a system that can capture carbon dioxide emissions before they are vented into the atmosphere and then, powered by solar energy, convert that carbon dioxide into valuable chemical products, including biodegradable plastics, pharmaceutical drugs and even liquid fuels.

Scientists with the U.S. Department of Energy (DOE)'s Lawrence Berkeley National Laboratory (Berkeley Lab) and the University of California (UC) Berkeley have created a hybrid system of semiconducting nanowires and bacteria that mimics the natural photosynthetic process by which plants use the energy in sunlight to synthesize carbohydrates from carbon dioxide and water.

A key to the success of their artificial photosynthesis system was the separation of the demanding requirements for light-capture efficiency and catalytic activity that is made possible by the nanowire/bacteria hybrid technology. With this approach, the Berkeley team achieved a solar energy conversion efficiency of up to 0.38% for about 200 hours under simulated sunlight, which was about the same as that of a leaf.

The yields of target chemical molecules produced from the acetate were also encouraging, as high as 26-percent for butanol, a fuel comparable to gasoline, 25-percent for amorphadiene, a precursor to the antimalarial drug artemisinin, and 52% for the renewable and biodegradable plastic PHB. Improved performances are anticipated with further refinements of the technology.

Study: Free Market Forces Best Bet To Reduce Global Carbon Emissions
The best way to reduce carbon emissions and combat climate change is through the use of market ......