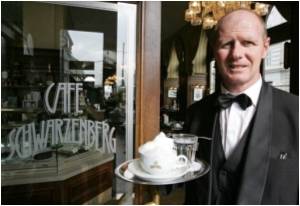 Across Naples, cafes marked "Suspended Coffee Day", spotlighting a remarkable tradition of social solidarity in the crisis-hit Italian city that is now more needed than ever.

Using chalk board signs in cafes and by word of mouth, dozens of cafes have let the city's growing army of poor -- Neapolitans and immigrants alike -- know they can come for a free coffee with money left by better-off customers.

The practice of "caffe sospeso" is simple: leave money for a coffee when you are getting one yourself and someone who cannot afford one gets it for free.


"It is something you used to do when you passed a university exam, or won the lotto or had your birthday. Pay for a coffee for someone you didn't know," said Maurizio del Bufalo, a former UN aid worker and founder of the "Suspended Coffee Network" which now includes 200 cafes in Naples and around the world.
Advertisement
"We want to re-launch this custom. Suspended coffee is a typical expression of the popular culture of Naples. It could only have come here," he said, on the sidelines of a human rights festival he is also organising in the city.

The custom is based on a system of trust in the bar as generous customer and needy recipient never meet and there is no formal way to keep tabs.

"I think of it as a gesture of civility, it's not charity. It's a really great tradition," said Ivan Esposito, 74, a retired maths teacher, after leaving a "suspended coffee" at the city's most famous cafe, Gambrinus.

The cafe's owner, Antonio Sergio, said the tradition began at Gambrinus at the start of the 20th century when the first coffee machines were introduced.

"It used to be something offered to the carriage drivers," he said.

"Coffee used to cost a lot and people couldn't afford it, that's how suspended coffee began," he said, adding that he hoped initiatives like "Suspended Coffee Day" would encourage younger people to adopt the practice.

"They haven't known real poverty. I hope young people take it up," he said.

At Nea bar on trendy Piazza Bellini also in Naples, the owners have even published a guide to cafes where the practice is customary.

Co-owner Luigi Solito said he saw it as a "genius" grassroots initiative.

"It is about neighbour helping neighbour without intermediaries," he said.

The custom became most widespread during the lean days after World War II -- when the sprawling port city suffered a devastating social crisis.

While the situation may not be as desperate as back then and the poverty not as visible, need is growing amid Italy's longest post-war recession.

"The increase in poverty and the economic crisis in the last few years have brought back habits from the post-war period," Del Bufalo said.

"There is a need for these systems of mutual solidarity," he said.

At Pizzeria Oliva in the working-class Sanita district north of the city centre, the "suspended coffee" has been replaced by "suspended pizza".

"We noticed there were a lot of people coming who had a real economic need," said Ciro Oliva, the 21-year-old manager of the restaurant.

"Pizza is the daily bread that Jesus left us. We have to share it," he said.

Customers leave something extra and depending on the amounts, the owners write up on a chalk boards how many free pizzas are going that day.

"People are often ashamed to ask. It's tough for people who have always been able to afford food," he said.

The pizzeria even offers a delivery service for the free pizzas, bringing them to humble homes or the homeless in the streets.

Oliva said around 20 percent of recipients are Neapolitans and 80 percent are immigrants -- mostly Romanians and Sri Lankans.

They give out around 15-20 "suspended pizzas" a week and generous customers leave around two a day.

One recipient on the night AFP visited was Peppe Bocchetti, a scruffy 50-year-old unemployed local who used to work as a fruit vendor and now survives with a portion of his sister's pension.

Ideal Time to Drink Coffee: 10:30 Am
A neuroscientist suggests that the most effective time for drinking coffee was between 9.30am and .....