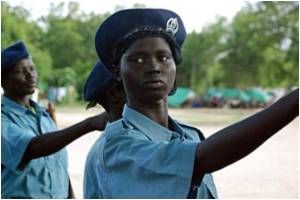 Nearly two dozen people were arrested by Sudanese police as they came out of the capital's first ever mixed-gender fashion show.

Around 25 people were arrested, among them male and female amateur models, as they emerged from a popular Khartoum club after the fashion show, they said. There was no immediate explanation from police as to why they were arrested.

Scars on Severion Wayet's arms reveal where the flesh-burrowing Guinea worms burst through her skin. It was an agonising process that lasted days as the worms, measuring around one
Advertisement

All were released during the day on Friday, but many were told to appear later before the state prosecutor amid speculation that they could be charged with "indecency," some of those who were detained said.


"I spent the night in jail but it is not clear why they arrested us," Sudan-born male model Rashad el-Nimeiry, who holds US nationality, told AFP.

According to The World Health Organisation,millions of people in South Sudan and Darfur need access to healthcare.
Advertisement
"We were decently dressed. There were wedding clothes," he said, pointing to bruises on his neck as he left prison wearing a torn shirt.

One young model, among those asked to appear before the prosecution on Sunday, told AFP after his release that he was insulted by prison guards.

"In prison, the guards called me 'you gay b(expletive)'," said the man who asked that his name not be published. "In our culture this is a really bad word. It is humiliating.

The brother of one of those held told AFP that there was no single explanation as to why the arrests took place.

"Some people were arrested because they did not have a permit to organise a party, others because they partied beyond 11:00 pm and others were detained for apparently drinking alcohol," he said, asking not to be identified.

The consumption of alcohol is absolutely forbidden in Khartoum, and President Omar al-Beshir warned in March that making, selling or consuming alcohol will be punishable by the lash under Islamic law or sharia.

Fashion shows are not a novelty in Khartoum, but Thursday's event was the first to feature male and female models parading under the same roof in the capital.

Journalist Lubna Ahmed Hussein drew international attention to the application of sharia in Sudan following her arrest last July, along with 12 other women, for wearing "indecent trousers."

Hussein, a women's rights campaigner who also worked for the United Nations, was jailed briefly last year for refusing to pay a fine and later travelled to France to promote a book about her ordeal.

Sudanese law stipulates a maximum of 40 lashes for wearing clothing deemed to be indecent.

The show was staged in a popular Khartoum club in front of families and friends of the models.

A Sudanese female designer presented wedding dresses as well as her version of the "tob" -- a colourful long piece of material which north Sudan women wear draped around their bodies from head to toe.

Islamic law is not implemented in south Sudan, which is home to mainly Christians and animists.

More than 300,000 children under the age of five die of preventable diseases each year in Sudan, almost a third of them before they reach the age of one month, a UN official said on Tuesday.
Advertisement
<< Deprivation Alone Cannot Explain Glasgow's High Mortality R...
Scientists Ask If Walkable Neighborhoods Really Get People ... >>

Number of Hungry People in Southern Sudan Has Quadrupled