McCartney Asks Manmohan for a 'Meat-Free Day' in India 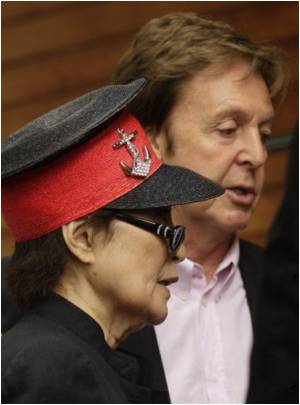 Former Beatle Sir Paul McCartney has asked Indian Prime Minister Dr. Manmohan Singh if he would make 12 January, the anniversary of the founding of the Indian branch of animal welfare charity PETA, a meat-free day.

He has written to Singh asking him to declare a national day to "celebrate vegetarianism and compassion towards animals," reports the Scotsman.

PETA's Person of the Year is Pamela Anderson

Model-actress Pamela Anderson has been bestowed the Person of the Year award for 2010 by the People for the Ethical Treatment of Animal (PETA).
Advertisement

"Would you please think about declaring one day every year - perhaps on the anniversary of PETA India's founding to celebrate vegetarianism and compassion towards animals?


"Such a declaration would save countless animals, reduce the environmental devastation caused by the meat industry and help participants clear their arteries and their consciences. It would be a celebration of life - all life."

Almost half of the Indian population is estimated to be vegetarian due to religious or financial reasons.

Hong Kong, one of Asia's busiest aviation hubs has deemed as too racy, Pamela Anderson's latest ad for PETA, which is banned at some US airports.
Advertisement
<< 1.8m Female Infant and Child Mortality Linked to Domestic V...
Link Between Brain's Fatty Acid Metabolism and Obesity Iden... >>

Former US President Bill Clinton has been named PETA'S 2010 Person of the Year.

Use of Animals Not Needed in Medical Training, Says PETA

Drug - Food Interactions Loram (2 mg) (Lorazepam) How to Reduce School Bag Weight - Simple Tips Pregnancy Confirmation Calculator Accident and Trauma Care The Essence of Yoga Daily Calorie Requirements Calculate Ideal Weight for Infants Diaphragmatic Hernia Sanatogen
This site uses cookies to deliver our services. By using our site, you acknowledge that you have read and understand our Cookie Policy, Privacy Policy, and our Terms of Use