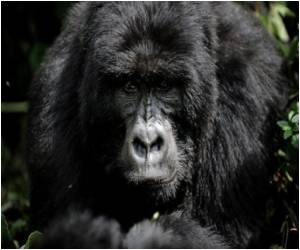 Malaria's most dangerous parasite has crossed the species barrier from gorilla to man, warned scientists.

Plasmodium falciparum is the deadliest of the five known strains of malaria parasites, causing several hundred million cases each year, of which around a million are fatal.

The parasite passes from one human to another via a female Anopheles mosquito, which hands it on when the insect takes a blood meal.


Until now, conventional thinking was that the parasite was first transmitted to humans from chimpanzees, our closest relatives, from which we genetically diverged between five and seven million years ago.

Links To Cross Species Evolution Of Malarial Parasite Traced Out!

The evolutionary relationship between human and rodent malarial parasites has been identified in a new study by the researchers at Sackler Institute for Comparative Genomics.
Advertisement
The chimp carries its own type of malaria parasite, Plasmodium reichenowi, and it was thought that P. falciparum was simply one of P. reichenowi's many strains.

This assumption was indirectly strengthened by findings that the AIDS virus probably came to humans from chimps, which have a similar immunodeficiency microbe. The first case may have occurred in central-western Africa around a century ago, possibly involving an individual who ate or handled infected bushmeat.

But a new look at the origins of malaria, published in the British science journal Nature, says that the Plasmodium parasite crossed from another of our great-ape cousins, the gorilla, and adapted to humans.

Scientists led by Beatrice Hahn of the University of Alabama at Birmingham went to painstaking lengths to investigate their hypothesis.

They collected almost 3,000 samples of faeces dropped by wild-living great apes -- chimps, gorillas and bonobos (Pan paniscus) -- at field sites across central Africa and sequenced the DNA of any Plasmodium pathogen found in these droppings.

Between a third and a half of the chimp and western gorilla (Gorilla gorilla) populations were infected with Plasmodium parasites, and infections were almost always of mixed strains.

There was no signs of infection among bonobos and eastern gorillas (Gorilla beringei).

On the Plasmodium family tree, a "nearly identical" match for P. falciparum was found in faeces in western gorillas rather than in chimps, the researchers found.

"Human P. falciparum formed a monophyletic lineage within the gorilla parasite radiation," the paper says. "These findings indicate that P. falciparum is of gorilla origin and not of chimpanzee, bonobo or ancient human origin."

The scientists suggest that the transmission may have resulted from a single cross-species event.

What is unclear, though, is when the handover occurred. Also uncertain is whether gorillas represent a reservoir today for recurring human infection.