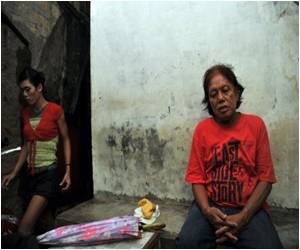 Set on a narrow dirt road in a dusty suburb of Jakarta, a dozen elderly women are gathered inside the pink house. Together they sew, bake and chat.

On first sight they look like a group of benevolent grandmothers, but the sunken cheeks and deep lines on some of their faces tell stories of hardship.

All of these women are "waria", a term used for Indonesian transgender people, and the house in the country's capital has been hailed by activists as the first old person's home for that gender community.


The word waria combines the Indonesian for woman (wanita) and the word for man (pria).

It is used to describe a range of gender identities, though it particularly refers to men who feel they are women and is applied regardless of whether they have undergone gender reassignment surgery or hormone therapy.
Advertisement
A home for elderly waria is an unexpected sight but perhaps also typical of the many contradictions in a nation where, until two years ago, the official government line on transgender people was that they were mentally ill.

As part of new moves towards acceptance, the government will in March begin supporting the home, which officially opened in November, with a basic nutrition programme while offering business seed money to 200 transgender residents in the city.

However, most of the funds needed to support the home will continue to come from its founder, Yulianus Rettoblaut, a waria and prominent activist better-known as Mami Yuli, who turned her own house into the shelter last year.

"We are focusing on elderly waria because NGOs usually focus on young ones," the 51-year-old told AFP.

She was inspired to take action after seeing many of her fellow ageing waria on the streets, ill, unemployed and forced to live in squalid conditions.

While a few waria have found domestic celebrity as talk show hosts or emcees, most across Southeast Asia's biggest nation of 240 million people are cast out by relatives who would otherwise be responsible for the care of their elderly family members.

"Life for them is very difficult and many live under the poverty line. They often have no choice but to sleep under bridges," Mami Yuli said.

While the home is grossly underfunded, she tries to offer three daily meals to residents who learn sewing, baking and hairdressing if they are jobless.

Conditions are far from ideal -- the 12 waria who live there sleep on old mattresses crammed into one bedroom at the top of steep, narrow stairs.

When Mami Yuli fails to raise the 350,000 rupiah ($36) a day needed to run the house, she organises street performances where the residents of the home sing and dance. Despite their age they are expected to work to make a living if they can.

Despite the huge challenges, she hopes to one day be able to accommodate all 800 of Jakarta's elderly waria and expand her home into the vacant lot next door, if she can raise enough money or secure state support.

An estimated 35,000 Indonesians are transgender, the Asia-Pacific Coalition on Male Sexual Health reports, but activists suspect the figure is much higher.

Despite being considered sacred by some Indonesian ethnic groups, waria largely remain a target of harassment and intimidation, although there are signs of increasing acceptance.

Discrimination forces many into sex work, fuelling an increase in HIV rates from six to 34 percent between 1997 and 2007 among transgenders in Jakarta, according to Health Ministry data.

Prostitution is illegal in Indonesia and the country's Islamic clerics say it is "haram" (forbidden).

But the industry thrives in Indonesia's karaoke bars and darker street corners where waria can be found holding up dresses up to show off breasts grown with hormones from birth control pills or silicone injections.

Some also reveal their gender reassignment, though few waria can afford to go down this path. The surgery has been available since the 1970s but not under the public health system.

At 70 years old, Yoti Oktosea is a male-to-female transgender and one of Mami Yuli's current residents.

Dressed down in knee-length shorts and a baggy T-shirt, she's given up putting on make-up and curling her eyelashes, but proudly shows a photo of herself as a young woman.

In those days she was in demand as a sex worker, she says.

"But things are much saggier now!" she laughs.

Smartly-dressed Mami Yuli also worked as a prostitute for 17 years but managed to turn her life around, becoming the first "out" waria to get a law degree from an Islamic university, at the age of 46.

The hardline Islamic Defenders Front (FPI) are the waria's most vocal foe, using violence and intimidation to shut down several transgender events which they say "threaten Indonesia's Islamic values", including the Miss Waria pageant in December.

"We had the pageant shut down and we're willing to shut down other waria gatherings again," FPI Jakarta chief Habib Salim Alatas said.

But signs are growing that the future might be a little brighter for this marginalised community.

In 2008 the first Islamic school specifically for transgender people to pray and study the Koran opened in 2008 in Yogyakarta. The establishment of Mami Yuli's home for the elderly is seen as another victory.

Source: AFP
Advertisement
<< Offer IVF Fertility Treatment to UK Women Up to the Age of ...
At Hospitals, Staff Satisfaction may Affect the Quality of ... >>

Indonesian Grandmother Spreads Green Ways in Smoggy Jakarta
Harini Bambang Wahono's classroom is a kaleidoscope of greens, a fitting colour scheme for the ......

Indonesia to Introduce 'car Free Day' to Curb Pollution
Indonesia's capital will introduce a "car free day" every month even though an experiment ...