Food scientists have identified a new combo of diet that helps reduce blood sugar spikes in mice. The findings may lead to new diet strategies for people with diabetes.

Mice fed an antioxidant found in green tea -- epigallocatechin-3-gallate, or EGCG -- and corn starch had a significant reduction in increase in their blood sugar -- blood glucose -- levels compared to mice that were not fed the compound, according to Joshua Lambert, assistant professor of food science in agricultural sciences.


The dose of EGCG fed to the mice was equivalent to about one and a half cups of green tea for a human.

Lambert, who worked with Sarah C. Forester, postdoctoral fellow, and Yeyi Gu, graduate student, both in food science, said EGCG was most effective when the compound was fed to the mice simultaneously with corn starch. For humans, this may mean that green tea could help them control the typical blood sugar increases that are brought on when they eat starchy foods, like breads and bagels that are often a part of typical breakfasts.

"If what you are eating with your tea has starch in it then you might see that beneficial effect," Lambert said. "So, for example, if you have green tea with your bagel for breakfast, it may reduce the spike in blood glucose levels that you would normally get from that food."

The EGCG had no significant effect on blood sugar spikes in mice that were fed glucose or maltose, according to the researchers who released their findings in the online version of Molecular Nutrition and Food Research. Lambert said that the reason blood sugar spikes are reduced when the mice ate starch, but not these sugars, may be related to the way the body converts starch into sugar.

An enzyme called alpha-amylase that is produced in both the mouth and by the pancreas helps break down starch into maltose and glucose. EGCG may inhibit the enzymes ability to break down the starch, the researchers indicated, since they also found that EGCG reduced the activity of alpha amylase in the pancreas by 34 percent.

If the mechanism holds in humans, this may mean that people who want to limit the blood sugar spike should skip adding sugar to their cup of green tea.

"That may mean that if you add sugar into your green tea, that might negate the effect that the green tea will have on limiting the rise in blood glucose level," Lambert said.

Lambert added that the green tea and the starch would need to be consumed simultaneously. For example, drinking a cup of tea well after eating a piece of toast would probably not change the blood sugar spike.

For the study, researchers separated mice into several groups based on body weight. After a fasting period, the mice were given common corn starch, maltose, or sucrose. One group of mice received EGCG along with the feed, while a control group was not fed the compound.

The researchers then tested the blood sugar levels of both groups.

Lambert said the researchers next step is to test the compound on people.

"The relatively low effective dose of EGCG makes a compelling case for studies in human subjects," the researchers said. 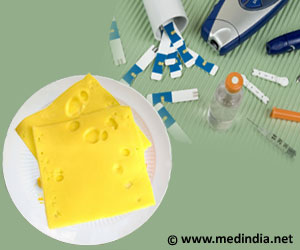 Cheese can Help Beat Diabetes
A moderate amount of cheese each day can help keep diabetes away, according to a new study.
READ MORE