According to an expert, regular intake of chocolate, fruits, vegetables, red wine and tea could help protect against Alzheimer's disease.

Flavonoids are naturally occurring antioxidants, which help beat cancer and the aging process by protecting cells from damage. They also mop up potentially harmful oxygen molecules in the body.


New research is emerging that suggests flavonoids do not act only as antioxidants but exert their effects in other ways.

"There have been some intriguing epidemiological studies that show the consumption of flavonoid-rich vegetables, fruit juices and red wine delays the onset of the disease," the Daily Express quoted Williams as saying.

Williams and his colleagues have focused their own cellular studies on a flavonoid called epicatechin, found in many foodstuffs, including cocoa.

"We have found that epicatechin protects brain cells from damage but through a mechanism unrelated to its antioxidant activity and have shown in laboratory tests that it can also reduce some aspects of Alzheimer's disease pathology," he said.

Central to the development of Alzheimer's disease is beta-amyloid peptide, a substance normally produced in the brain but which in Alzheimer's is deposited abnormally.

Williams has shown that flavonoids can protect brain cells against the toxic actions of beta-amyloid.

"The challenge now is to identify the single flavonoid or combination of flavonoids that exert the most positive effects," he said.

Williams will present his findings at the British Pharmacological Society's Summer Meeting in Edinburgh. 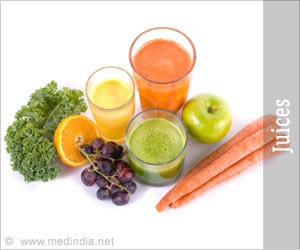 Juices for Detoxification and Wellbeing
Freshly squeezed fruit and vegetable juices can work wonders for the body and mind. Winters are the best time to benefit from the nutrient rich fresh green, red, orange fruits and vegetables.
READ MORE

Alzheimers DiseaseAnti-ageing and Benefits of Red WineWhy Do We Eat - Nutrition FactsDiet Lifestyle and Heart DiseaseBubbles and Brews - Alcohol FactsLabel Lingo on Food Items: DecodedAnti-Aging Treatment with Vinotherapy or Wine FacialsSuperfood Pomegranate for Beauty and WellnessJuices for Detoxification and WellbeingBael - The Ultimate Medicinal Summer Fruit