Even After Cancer Diagnosis Most Patients Dont Quit Smoking 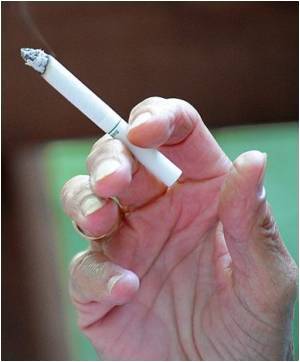 A sizeable population of lung and colorectal cancer patients carry on smoking even after being diagnosed, reveals a new study.

When a patient receives a cancer diagnosis, the main focus is to treat the disease. But stopping smoking after a cancer diagnosis is also important because continuing to smoke can negatively affect patients' responses to treatments, their subsequent cancer risk, and, potentially, their survival.

A team led by Elyse R. Park, PhD, MPH, of the Massachusetts General Hospital/Harvard Medical School in Boston, studied how many patients quit smoking around the time of a cancer diagnosis, and which smokers were most likely to quit.


The investigators determined smoking rates around the time of diagnosis and five months after diagnosis in 5,338 lung and colorectal cancer patients.

Factors and characteristics that predicted continued smoking differed by cancer type. Lung cancer patients who continued smoking tended to have Medicare or other public health insurance, have a lower body mass index, have low emotional support, not have received chemotherapy, not have had surgery, have had prior heart disease, and have smoked a high number of cigarettes per day at some point during their lives.

Colorectal cancer patients who continued to smoke tended to be male, have completed less education, be uninsured, not have had surgery, and have once smoked a high number of cigarettes per day.

"These findings can help cancer clinicians identify patients who are at risk for smoking and guide tobacco counseling treatment development for cancer patients," said Dr. Park.

The study was published early online in CANCER, a peer-reviewed journal of the American Cancer Society.

Every cigarette you smoke is causing irreversible damage to your body; slowly killing you from the inside. It also endangers those around you, your family and children.
Advertisement
<< Cant Accuse Hormones Alone for Women's Mood Swings
Intensive Care Required for Romania's Health System >>