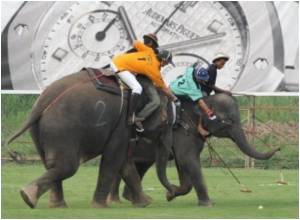 Guinness World Records said Monday it had decided to remove all references to elephant polo, following complaints from animal-rights campaigners.

The London-based global authority on records said the move brought its policy into line with other records that are potentially harmful to animals.

The Queen and duchess have been accused of ostentatious display of cruelty after they were seen wearing real fur.
Advertisement

"Guinness World Records does not recognise any records relating to elephant polo," the group said in a statement.


"The decision to rest these records was based on expert counsel which advised that the activities related to elephant polo could be potentially harmful to the animals.

A southwest Virginia puppy mill has been busted. Housing more than 600 breeding females, the site is now seeing a huge rescue operation.
Advertisement
"This decision is in line with our policy not to accept or recognise any records based on the killing or harming of animals, this includes fox hunting and bull fighting."

People for the Ethical Treatment of Animals, which has lobbied Guinness over the issue, said it had been informed of the move in a letter from Craig Glenday, the Guinness Book's editor-in-chief.

A PETA spokeswoman told AFP that the decision "reflects the public consensus that the archaic use of live animals for human entertainment should remain in the pages of record book history".

"Elephants used in polo are often beaten with sticks and gouged with heavy rods with sharp metal tips," she said.

"Elephants exploited for polo matches are likely unweaned when they are taken from their mothers to be broken and made to fear repercussions if they do not behave as required.

"They are subjected to a life of chronic physical ailments, social and emotional deprivation and premature death."

A form of polo played with elephants instead of horses is popular in India and Thailand.

The records were dropped in October last year.

Britney Spears has been cleared as a threat to her dogs following an investigation by animal welfare authorities.
Advertisement
Advertisement
This site uses cookies to deliver our services.By using our site, you acknowledge that you have read and understand our Cookie Policy, Privacy Policy, and our Terms of Use  Ok, Got it. Close
×