Diseases may be Warded Off by 'Liquid Smoke' from Rice 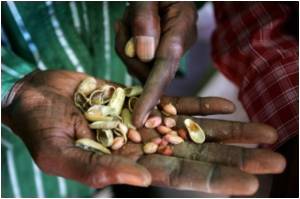 Liquid smoke flavoring made from hickory and other wood can face tough competition from liquid smoke produced from rice hulls, says a new research. The latter seems to be packed with antioxidant, antiallergenic and anti-inflammatory substances.

Mendel Friedman, Seok Hyun Nam and colleagues explain that wood from trees is typically used to produce liquid smoke, added to meat and other foods for a smoky taste. But other types of plants can also be burned to make the popular seasoning. Rice is a prime candidate, with 680 millions tons produced worldwide each year. Hulls account for 136 million tons of that amount and often go to waste.

The researchers wondered rice hulls could be put to good use in a liquid form as a food flavoring, and did the first studies needed to determine if rice hull smoke is safe enough for food use.


The scientists found that liquid smoke from rice hulls - the hard, inedible coverings of rice grains - may be healthful. Their tests on laboratory cell cultures found that liquid rice hull smoke worked as an antioxidant that could help fight off diseases.

Understanding the cause and mechanism of seasonal allergy can help in choosing the right treatment.
Advertisement
It also helped prevent inflammation, which is associated with many different health problems did not trigger an allergic response. "New food uses of a major agricultural byproduct may benefit the environment, farmers, and consumers," the report stated.

The study is published in ACS' Journal of Agricultural and Food Chemistry.

Over-the-counter (OTC) drugs can be bought without a prescription. OTC allergy medications are for the allergy sufferer to choose the right over-the-counter drugs.
Advertisement
<< Report Says Over 400,000 Women Raped in Congo in 2006-07
UN Report Reveals World Wastes 1.3 Billion Tons of Food a Y... >>