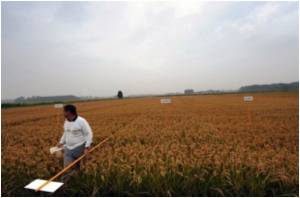 A new analysis has revealed that feeding the world releases up to 17,000 megatonnes of carbon dioxide into the atmosphere annually.

According to the report by the CGIAR Research Program on Climate Change, Agriculture and Food Security (CCAFS), while the emissions "footprint" of food production needs to be reduced, a companion policy brief by CCAFS lays out how climate change will require a complete recalibration of where specific crops are grown and livestock are raised.

According to a panel of experts have determined that China's carbon emissions output could peak around 2030.
Advertisement

Together, Climate Change and Food Systems and Recalibrating Food Production in the Developing World: Global Warming Will Change More Than Just the Climate, shed new light on the intertwining evolutions of climate change and the world's food system and their potential impact on humanity's relationship with food.

Minister of State for Environment and Forests, Jairam Ramesh, said on Saturday that about 11 per cent of the annual greenhouse gas emissions (GHG) is being absorbed by the country's forests.
Advertisement
While previous studies have looked at the contribution of agriculture to emissions, Climate Change and Food Systems assesses the entire food system's emissions "footprint"- in total somewhere between a fifth and third of the greenhouse gases emitted by people on this planet.

This figure accounts for every aspect of food production and distribution-including growing crops and raising livestock, manufacturing fertilizer, and storing, transporting and refrigerating food.

Agriculture accounts for around 80 percent of these emissions, but the combined contribution of transport, refrigeration, consumer practices and waste management is growing.

"The food-related emissions and, conversely, the impacts of climate change on agriculture and the food system, will profoundly alter the way we grow and produce food. This will affect different parts of the world in radically different ways, but all regions will have to change their current approach to what they grow and eat," Sonja Vermeulen, the head of research at CCAFS and the lead author of the study, said.

Yields of the three biggest crops in terms of calories provided - maize, rice and wheat - will decrease in many developing countries as temperatures rise and rainfall becomes more unpredictable, according to Recalibrating Food Production in the Developing World.

The analysis, which studies the potential effects of climate change on 22 of the world's most important commodities, highlights the impending transformations of the agricultural landscape.

By 2050, climate change could cause irrigated wheat yields in developing countries to fall by 13 percent. Irrigated rice is these same countries could tumble 15 percent. In Africa, many farmers of maize, which is not that well suited to increased temperatures, could lose 10 to 20 percent of their yields.

Additional calorie and protein sources will also suffer in many places. The cost of feeding livestock with maize and grain will become more expensive. And the availability of fish - which are particularly susceptible to higher temperatures and higher ocean salinity - will become increasingly constrained.

Vegetable sources of protein will not fare much better. Soybeans have great difficulty withstanding higher temperatures. Even heartier crops, such as millet, lentils and cowpea - "the poor man's meat" - can wither under too much heat stress.

"Ecosystem changes due to climate change may spawn shifts in the intensity of pests and diseases, including potato blight and beetles, that will further limit food production. Indeed, even if crops could withstand increased temperatures and decreased rainfall, their yields could drop because of these scourges," Philip Thornton, theme leader at CCAFS, said.

The impact of climate change also hits before and after harvest. Every step of the food chain - from the seed to the farm to the cooking pot - is at risk.

Increased temperatures and flooding, which exacerbate challenges to food storage and distribution, may cause more outbreaks of food-borne illnesses.

This spread of diarrheal diseases, which already kill 1.9 million people a year, and livestock-related diseases, which include zoonoses, infectious diseases transmitted from livestock and other animals to humans, will hit the poor in low-income countries hardest.

"So far, the climate change discussion has focused on the need to reduce emissions and sustainably boost crop yields, but it is crucial also to include food safety in our foresight and planning," Vermeulen said.

As farmers and food producers adapt and recalibrate their responses to climate change and its many challenges, the culture of food and what is eaten will need to adjust or change completely as different crops are raised to compensate for new growing conditions.

"The problems that climate change produces in the fields will be tackled in industrialized countries. It is the smallholder farmers in Africa and South Asia and the urban poor who spend too much of their wages on food; these are the people who will have less to eat in the near future unless we adapt at a much faster pace," said Robert Zougmore, CCAFS' regional program leader for West Africa, said.

The study has been published in the 2012 Annual Review of Environment and Resources.

Expert Calls on U.S. and Australia to Do More to End Greenhouse Gas Emissions

An environment expert today labelled the White House-sponsored climate change conference a failure, saying that the US needed to do much more to end the proliferation of greenhouse gas emissions.
Advertisement
<< Years After Diagnosis, Some Cancer Survivors Reported Poor ...
Water Workouts Just as Good as on Land: Study >>