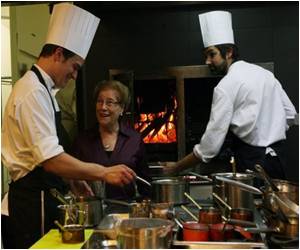 Humbly tracing their inspiration to their mum's cooking are the three brothers in Spain's northeastern Catalonia region who snatched the title for the world's best restaurant, the Celler de Can Roca.

The Roca brothers, Joan, Jordi, and Josep, had already wowed critics and diners worldwide with a cutting edge technique and cooking rooted in Spanish and Catalan traditions, earning them three Michelin stars.

But four years after fellow Catalan restaurant El Bulli, since closed, was recognised as the best in the world, their Celler de Can Roca this week took the same spot in a vote of food critics and industry leaders organised by British magazine Restaurant.


"The best restaurant in the world does not exist, each one has its own thing, so you have to look at it with a bit of perspective," said Joan Roca, the 49-year-old chef who founded Celler 26 years ago, in an interview with AFP after returning from the awards in London.
Advertisement
Joan has worked for the past 16 years with his brothers, 35-year-old pastry and desert chef Jordi, who is renowned for surrealist culinary creations, and 47-year-old Josep, chief sommelier in charge of a cellar of 35,000 bottles sheltering behind a facade of wooden wine crates.

The brothers' restaurant, with its clean lines and large glass walls, boasts a vast kitchen where 35 cooks from around the world prepare dishes for 45 diners.

But it is nestled in a working-class district of Girona just down the road from the Can Roca restaurant-bar run by their parents Josep Roca and Montserrat Fontane, both pensioners, where the brothers first learned their trade. There, a handful of staff cook up a menu of the day for just 10 euros.

"Cooking will be good if it comes from the heart. At the end of the day what my mother does is not so different from what we do," said Joan, wearing his white chef's tunic.

The difference between the two establishments is the "complexity", he said.

"It is a cuisine that aims to pay homage to this land but which is also open to dialogue with science, technologies," he said of El Celler's cooking, which is famously based on perfumes.

In the kitchen, a glass apparatus containing earth from a nearby forest is extracting the "active aromas" for a dish of morel mushrooms.

On his workbench you can see flasks of the perfumes the brothers use as inspiration, including the scent Shalimar de Guerlain, which produced a tea, rose and fruity mix, and a lemon perfume, which forms the base of his star desert, Lemon Cloud, made with Bergamot orange cream, lemon and madeleine cakes. "We created it thinking of children, of the family," Jordi said.

It is this mix of culinary daring and family tradition that has won over critics worldwide.

"El Celler believes in free-style cooking, with a commitment to the avant-garde, but remaining faithful to the memory of different generations of the family's ancestors, all dedicated to feeding people," the contest organisers said in announcing the restaurant's world number-one spot after two years as runners-up.

"Its philosophy is one of 'emotional cuisine', with ingredients chosen to take diners back to childhood memories and a specific place in their past," they said.

Source: AFP
Advertisement
<< Research: Gene Expression Test Distinguishes Between Breast...
Effectiveness of 2 Vs. 3 Doses of HPV Vaccine for Girls and... >>

Denmark's Noma Loses World Restaurant Crown After Food Poisoning Outbreak
One month after dozens of people came down with a bout of food poisoning from the Copenhagen ......