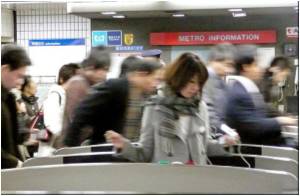 A government agency revealed that in April, a record 923,000 foreigners travelled to Japan, up 18.1 percent from a year earlier, taking advantage of a weaker yen and an increase in chartered flights.

The previous monthly high was 879,000 in July 2010, the Japan National Tourism Organisation said.

Tourism has rebounded since 2011, when visitor numbers plunged following the massive earthquake and tsunami that ravaged Japan's northeast and sparked a nuclear crisis at the Fukushima power plant in March that year.


The numbers of visitors from Taiwan, Thailand, Vietnam, France and Russia hit record highs in April, while South Korea topped the list at 204,200, up 33.7 percent from a year earlier.

But the number of visitors from China slumped 33.0 percent to 100,200 for the seventh straight year-on-year decline, amid simmering tensions over Beijing's claims to Tokyo-controlled islands in the East China Sea.

Elderly are Not Acting Their Age in Japan
Many elderly people in Japan still act like they are in the prime of their youth....

Enthusiasts Gather in Japan for The World Tea Festival
In the shadow of a giant Chinese character for tea written in live cypress trees, in Japan, ......