Changing Preferences: Westerners Head to Asia to Feed Their Souls 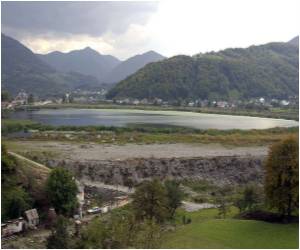 Tens of thousands of people visit India each year hoping to nourish their souls in ashrams and other retreats dotted around the country.

Hundreds gathered earlier this month in the small town of Rishikesh on the banks of the Ganges for an international yoga festival set against the backdrop of the Himalayas.

The town, made famous by British rock group The Beatles who visited for meditation classes in 1968, teemed with Westerners along with long-haired yogis and gurus who led classes and gave advice on the importance of self-reflection.


"I came here to be near the source of spirituality," Christel Pierron, a French yoga teacher based in Cape Cod in the United States, told AFP. "So many great yogis came here to meditate that it creates a sort of energy flow."

Medical Tourism has become a serious enterprise in India over the last two years. However some hospitals have been practicing it for quite a few years.
Advertisement
The International Yoga Festival began in 1999 when about 50 enthusiasts visited. Now in its 12th edition, more than 400 made their way to Rishikesh for a week of intensive classes from daybreak to sundown.

"With the stressful lives that we have in West, we need to look after our bodies and our souls," said Pierron, adding that the next part of her trip would be a visit to see the Dalai Lama.

Dharamshala, the home in exile of the Tibetan spiritual leader, is a pitstop for many tourists seeking more than the beaches and ancient palaces which are the staple fare for most holidaymakers in India.

Audiences with him can be arranged through his private office and his public teachings held at the main temple in the hill town draw large crowds of devoted monks and star-struck visitors.

The other place of pilgrimage for Buddhists is Bodh Gaya in the northern state of Bihar in India where Buddha is believed to have attained enlightenment.

Swami Chidanand Saraswatiji, who runs one of the biggest meditation centres in India, the Parmath Niketan ashram in Rishikesh, believes he knows why so many Westerners come to the country in search of the esoteric.

"Everyone comes because they need peace and happiness," he told AFP. "Immediately, they get connected because Rishikesh is the birth place of yoga. Here you learn how to become noiseless."

Hunger for the simple and the opportunity for introspection has spelt good business for Eric Grange, founder of Oasis Voyages, which sells itself as the only French agency specialised in "spiritual travel."

"People are suffering from the loss of their reference points in a world that is not doing well," he told AFP. "More and more, travellers no longer want to feed their digital camera, but feed their souls instead.