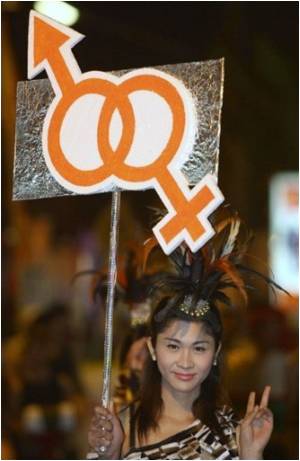 In a country where homosexuality is often seen as a disease, Vietnam's first film to openly feature love and intimacy between gay men is helping change attitudes.

Curious filmgoers have streamed into cinemas to catch "Lost in Paradise", which chronicles the doomed love affair between a gay prostitute and a book seller and provides a rare glimpse into a usually hidden side of Vietnam.

For some, the movie was eye-opening, with one Vietnamese woman saying the bittersweet love story had changed her views about homosexuality.


"Now I think they are just like us," said the 50-year-old state employee, who did not want to give her name, after watching the film in the capital.
Advertisement
Others, though, seemed uncomfortable, with a group of youths at a recent screening at Hanoi's Platinum Cinema laughing and a teenage girl covering her eyes during a scene in which the two lead actors kiss tenderly.

Homosexuality remains largely taboo in communist Vietnam, where Confucian social mores, with their emphasis on tradition and family, still dominate.

Gays are routinely portrayed as comical figures or as people suffering from a condition that can be treated -- something the makers of "Lost in Paradise" hope to help change.

"We just want to contribute so that gays are better accepted in our society. They don't need sympathy or understanding. They need equality", said Luong Manh Hai, who stars in the movie and co-wrote the script.

The film, directed by Vu Ngoc Dang, has been well received by critics at home and abroad, and will be screened at the Berlin International Film Festival in February before a general DVD release in October.

Hai calls the film "a slice of life", though he admits it was toned down for Vietnam's audiences when censors removed the more sexually explicit scenes.

In the raciest sequence to survive the cutting room, Hai caresses and kisses his partner's naked body, filmed from an angle that only reveals bare buttocks and leaves the rest of the couple's bedroom antics up to the imagination.

The film has so far grossed roughly 20 billion dong ($900,000), "a successful amount for a film of this kind", a staffer at the film's BHD Media production company said, asking not to be named.

The film has been warmly received by the small gay community of Ho Chi Minh City, where homosexuals feel life is easier than in other parts of the country, said openly gay student Nguyen Quoc Duy.

"I don't know if the movie succeeded in telling people that being gay is normal, but for sure it helped them understand who we really are and how wrong the prejudice they have against us is," the 21-year-old said.

Sociologist Le Quang Binh, who has headed several research projects on lesbian and gay issues, said films like "Lost in Paradise", as well as a recent photo exhibition about Hanoi's gay community, were paving the way for more openness about homosexuality.

"The press has become less discriminatory and more objective when covering gay topics," he said, while social networking sites were also helping to change the perception of homosexuality.

He noted some local media had covered what was billed as Vietnam's first lesbian wedding in 2010 and the union of two gay men last June, even though the celebrations were only symbolic, with same-sex marriage not legal in Vietnam.

"The younger generation now is also more open," added Binh, all of which could help make it easier for people to come out of the closet.

But the country still has some way to go. Khoa, a 34-year-old businessman in the Vietnamese capital, said he has yet to reveal his sexuality to his parents who live in the countryside, fearing "unimaginable damage" to his family.

"I'm doubtful that my parents would change their thinking that gays are sick even if they were to watch 'Lost in Paradise'," he said.

Still, Khoa said he was encouraged by the slowly changing attitudes around him.

"It's a long road, but there is light at the end of the tunnel."

Post-Nasal Drip The Essence of Yoga Diaphragmatic Hernia Vent Forte (Theophylline) Drug - Food Interactions Sinopril (2mg) (Lacidipine) Find a Hospital Loram (2 mg) (Lorazepam) How to Reduce School Bag Weight - Simple Tips Turmeric Powder - Health Benefits, Uses & Side Effects
This site uses cookies to deliver our services.By using our site, you acknowledge that you have read and understand our Cookie Policy, Privacy Policy, and our Terms of Use  Ok, Got it. Close
×